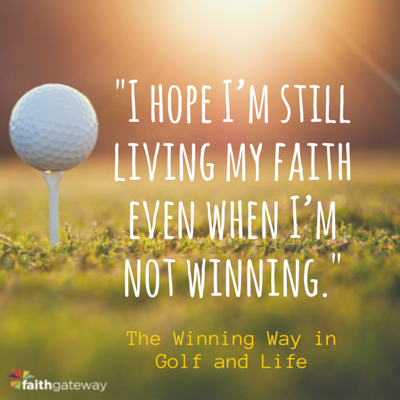 The Bible is a book about many things, but one of the great themes running from cover to cover is men and women rising to the challenges in life through faith in God.

When the test comes, when the difficulty arises, when the obstacle looms in front of you, don’t shy away from the challenge. With God’s help, step into it.

One of the most familiar stories in the Bible tells how David, a young Jewish shepherd boy, unexpectedly found himself in battle facing a freakish, nine-foot Philistine warrior named Goliath. You’ve no doubt heard the story somewhere. But what I personally love most about the account is how David approached the fight. The Bible tells us that this teenager, armed only with a sling and a few smooth stones from the brook, “ran quickly toward the battle line to meet him” (1 Samuel 17:48).

Moments later David was standing over the fallen giant, praising God for a great victory.

He ran to the battle line. Nothing illustrates inviting the challenge better than that.

Would I have run toward that battle line? I can’t honestly say, but I hope I would have. I can think of a few times when I have – and a number of other occasions when I haven’t. It would have been easy for David, small as he was, to play keep-away from Goliath, dodging from tree to tree, twisting, turning, or darting this way and that like an excited terrier. But that’s not what David did. Instead, he faced his great enemy, calculated the odds, and ran straight into battle, crying out,

You come against me with sword and spear and javelin, but I come against you in the name of the Lord Almighty, the God of the armies of Israel, whom you have defied. This day the Lord will deliver you into my hands, and I’ll strike you down and cut off your head. – 1 Samuel 17:45–46

And that’s exactly what he did.

I’m reminded of these words from pastor and author Dr. Charles Swindoll:

I am convinced that life is 10 percent what happens to me, and 90 percent how I react to it. [tweet this]

The first place I remember seeing that quote was taped to the mirror in my parents’ bathroom. So you might say that God began teaching me this concept at an early age – even though I didn’t know what it meant at the time.

It inspires me to think about how Davis Love III walked into that round of golf at The Players Championship, with the storm all around him, a great challenge before him, and his fellow players grousing about the conditions and cursing their luck. A day of great adversity became a day of unparalleled opportunity. The very circumstances that defeated many others became a tool to push him to one of the greatest victories of his life.

It sounds strange, but sometimes setbacks in a golf tournament can actually help to settle a player down and give him or her more focus. We can see that this is true by going back to Zach Johnson’s Sunday round at the Masters. He was in the third group, just two shots back, and in a position to make a move. So what did he achieve on the first hole that morning?

“It settled me down,” Zach recalled.

“Just that quickly I found myself three shots back, and the leaders hadn’t even teed off yet. The idea of winning, which had seemed so impossible, now seemed that much more impossible. But it also made it that much more fun to try! When I came away with a bogey, it was like, ‘Well, at least I got that out of the way.’ Then I had a little talk with myself, and said, ‘Zach, you’re not supposed to win this anyway, so just go play!’ I birdied the next two holes, started to look at the scoreboard, and then asked myself, ‘Why are you even doing that?’ I think I made another bogey on the front nine, but when I made the turn for the final nine, I really felt peace about the day. It was Easter Sunday, and I planned on enjoying it. Arriving at 18, I felt settled. It felt like I was teeing off on the 36th hole of the tournament rather than the final hole of the Masters.”

And as it turned out, Zach made par on the final hole, won the tournament, and had an Easter Sunday he would remember for the rest of his life.

But it doesn’t always work out that way, does it?

There will be those times when you aren’t able to overcome the odds, and your adversities bring you to a defeat rather than a surprise triumph. Even in those times, God can still work through your life in more ways than you realize. [tweet this]

“Success,” says Zach Johnson, “isn’t always on the scorecard. Winning isn’t always based on numbers or stats or hoisting up a trophy with everyone cheering for you. Yes, it’s a great opportunity when a Christian athlete can give thanks to God and profess his faith after winning a tournament. But what you don’t see are the guys who give glory to God even when they lose.

Nobody has a camera in your face when you finish 45th in a tournament. But the guys I’ve looked up to, the guys who have inspired me, are the guys who sign their scorecards – whether on Thursday or Sunday, whether they win or lose – and still are able to give glory to God. That, to me, is a successful day. That is winning.

“You may not even have to say anything. It may just be the way you walk, the way you hold your shoulders. There is no set way to glorify the Lord when you’re not winning – but that doesn’t mean you won’t have an opportunity to do so. Sometimes, even when you aren’t successful, you’ll hear another golfer say, ‘I like how you play the game. You always seem to have a peace about you no matter what your scorecard says or what you shot that day.’ That’s the kind of stuff you want to hear.

“I hope that’s true of me. I hope I’m still living my faith even when I’m not winning. You might not see the results on TV, but you can be sure that someone somewhere is watching.”

Winning at golf is one of life’s great privileges and pleasures. But it doesn’t hold a candle to winning at life. [tweet this]

Have you discovered how much of your day is determined by the attitude you choose, how you choose to react? No matter what is happening — success or failure, joy or sadness? Come join the conversation on our blog! We would love to hear from you about the importance of choosing to give God the glory come what may! ~ Devotionals Daily