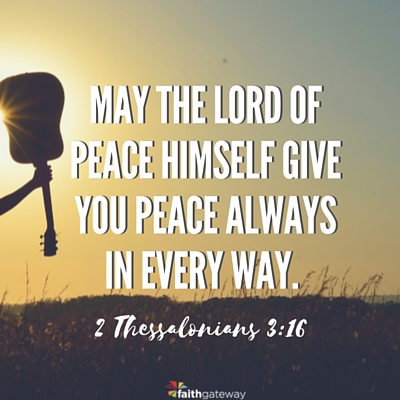 May the Lord of peace Himself give you peace always in every way. The Lord be with all of you.— 2 Thessalonians 3:16

The story goes that as a seventeen-year-old, he was stationed at Fort Jackson, South Carolina. His family had a music gig in Memphis, so he hitchhiked from the base to Memphis, and his family let him sing a song he had just written.

His name was Mylon LeFevre, and the song was titled “Without Him.”

That night on the side of the stage was another artist who heard the song and loved it. He then went on to record it. His name was Elvis Presley.

Years ago some friends and I formed a gospel quartet. We called ourselves The Thankful Hearts. One of the first songs we learned to sing and perform was “Without Him.” It is my favorite hymn because it speaks so strongly of peace and encouragement.

I sing that song to my children each night. My two-year-old has now grown to expect it, and I love that. He even sings along with me. The last line in the song is the perfect ending thought for our days: Without Him how lost I would be.

Have you ever heard an old Gospel song and felt the truth of the words of worship and thanksgiving pierce your heart? Today let’s thank the Lord of peace Himself for the peace only He can give! Come share without us about how Jesus has changed your life! We want to hear from you! ~ Devotionals Daily