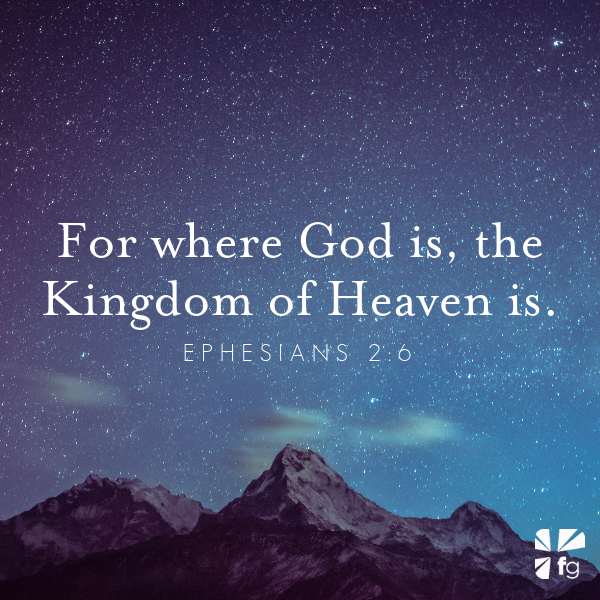 How Far Away Is Heaven?

As a child, I wondered where God lived in outer space and how long it would take to get there. Had I been old enough to read an astronomy textbook, I would have discovered a few statistics that would have blown me out of the water. Our solar system has a diameter of about 700 light-minutes. That’s eight billion miles. But the galaxy in which our solar system is contained has a diameter of 100,000 light-years. Not minutes, but years. Forget doing the math on that one. Our galaxy is humongous. But here’s the kicker: our little galaxy, which is 100,000 light-years wide, is just one of billions of other galaxies out in the cosmos.1

I can’t comprehend such gargantuan distances or the breathless enormity of space. Billions of stars and planets, all created by God, most of which the Hubble Space Telescope will never have time to scan. But it’s up there on the edge of earth’s atmosphere obediently and systematically doing just that — scanning the universe. The Hubble has recently captured images close to the very border of our cosmos, and I think it would knock our socks off if it could photograph the actual edge!

What is on the other side?

Scientific Journal may be stymied by that question, but not the Bible. Far beyond intergalactic space, with its billions of swirling nebulae and novas, lies another dimension. Some speculate it’s the fifth dimension. You could call it infinity, but wherever it is and however far out, the Bible calls it the highest of heavens.

To the Lord your God belong the heavens, even the highest heavens. — reads Deuteronomy 10:14

The outermost reaches of space are not as void and lonely as we think, because the highest part of heaven is the abode of God. It would seem this “third heaven,” as Scripture calls it (2 Corinthians 12:2), spreads out into infinity and completely engulfs our expanding cosmos with all its celestial bodies. It is the dimension where

The dwelling place of God exists in infinity. It is far, far away. That’s why I’m amused when the apostle Paul writes so casually in 2 Corinthians 12:2-4,

I know a man in Christ who fourteen years ago was caught up to the third heaven. Whether it was in the body or out of the body I do not know — God knows. And I know that this man… was caught up to paradise and heard inexpressible things, things that no one is permitted to tell.

The third heaven? The highest of heavens? C’mon, Paul, how did you arrive there so fast?

Paul wasn’t the only one to reach the throne of heaven in a flash. To the dying thief next to Him on the cross, Jesus said,

Today? Jesus, Paul, and a dead criminal spanned billions of light-years in the snap of a finger?

How Close Is Heaven?

I’ve always sensed that Heaven was a lot closer than we are led to believe. As any good child in Sunday school, I believed that heaven was “up.” In later years, I discovered that the Bible says it plainly: Paul was caught up to the third Heaven; Jesus ascended into Heaven; the Lord will catch us up into Heaven when He returns; and, conversely,

God looks down from heaven on all mankind. — Psalm 53:2, emphasis added

This is the language the Bible invites us to use, much as it encourages us to use other earthbound words like crowns or seas of glass. And it makes sense. Heaven certainly can’t be “down,” or we’d dig a hole to China.

Yet even though the dwelling place of God may be a long way up, distances like “up” and “down” lose their meaning when we realize that Heaven — even the highest heavens — exist beyond our space-time continuum. Latitude and longitude, as well as directions and distances, are related to time, and time is a part of the fourth dimension. And the fourth dimension is only a small part of infinity. Time there will be swallowed up. Step beyond the edge of outer space, and you enter the fifth dimension, where gargantuan distances lightyears long are a snap of the finger to, well… to the dying thief who, when he died, instantly appeared in paradise alongside Jesus.

Had I been the dying thief, I would have been dumbstruck to hear Jesus say, “Today you will be with me in paradise.” Today? This instant? Like Jesus taking my hand and walking with me through a wall, as He did in the upper room? Or appearing on a beach to cook breakfast for His friends? Or ambling along the road to Emmaus one instant and — flash — arriving in Jerusalem in no time flat? Like being changed in the twinkling of an eye?

Yes, and the Lord gives a clue as to how He does it in Revelation 1:8 when He laughs at time and distance:

‘I am the Alpha and the Omega,’ says the Lord God, ‘who is, and who was, and who is to come, the Almighty.’

Notice that Jesus does not follow the convention of our logic about the way time flows; we time-bound creatures want to change the order to read Jesus was, is, and is to come. It sounds more chronological. It’s consistent with our sense of the past, present, and future. But Jesus is the great I Am who always lives in the present. He is the God of the now.

I think of this every time I read Revelation 22, where Jesus says three times to the waiting church, “I am coming soon!” (To which the church replies three times, “Come, Lord Jesus.”) It’s interesting He doesn’t say, “I will come… like, sometime around, oh, a couple of thousand years from now.” Jesus puts it in the present tense as though He is but a hairbreadth away, all ready to part the veil of time and distance and step back into our world. It’s as though He is on His way back now.

So the Kingdom of Heaven, over which Jesus is and was and ever shall be King, is a place, but more so, a dimension where time and distance are not obstacles. The dying thief wasn’t transported at superhuman speed to Heaven when he died. Rather, he slipped from one dimension to the next, much like Jesus slipped from one room to another, through walls or whatever.

You cannot be transported to Heaven. You cannot go there in a rocket ship. You couldn’t even go there in a time machine, if there is such a thing. That’s because Heaven exists beyond even speeded-up time. Traveling at a zillion miles per hour might catapult you instantly to the edge of our universe, but to take a step into the third Heaven requires more. It requires something different, for our flesh and blood cannot enter Heaven.

You must be born again, or you cannot, as Jesus warned, “see the kingdom of God” (John 3:3). When the dying thief was born of the Spirit, he was given the spiritual “genes,” so to speak, of God Himself — Christ who is, was, and ever shall be. And we are too when we are Spirit-born. We, like the thief, are fit for eternity. Of course, the fine print in the contract says we must also follow the dying thief in another way and die first.

Heaven is close. Perhaps closer than we imagine. It’s a little like saying to an unborn infant in his mother’s womb, “Do you realize that you are about to be born into a great big world full of mountains, rivers, and a sun and a moon? In fact, you exist in that wonderful world right now.”

“Wait a minute,” the unborn baby might say. “No way. My world is the one surrounding me. It’s soft, warm, and dark. You’ll never convince me that just a few hairbreadths outside this uterus exists this place of rivers, mountains, and a sun and moon, whatever that stuff is.”

Dear baby! There he is, safe in his little world, ignorant of the fact that a more glorious world is enclosing and encasing his. A world for which he is being fashioned. Only when he is birthed into it will he comprehend that all along his warm, dark world was within it. This other place of wonderful beauty was present all the time. Only inches away.

Even this earth in all its birth pains is about to give one last grunt and find itself born as a “new earth” in Heaven. Actually, this moment, less than a hairbreadth, separates this material world from the spiritual world that is embracing earth. And like an unborn baby, we are being fashioned for the greater world into which we are about to be born (by dying, of all things!). We have a hard time believing that Heaven encompasses this world, and so the Bible has to keep prodding us to fix our eyes “not on what is seen, but on what is unseen” (2 Corinthians 4:18). It’s a matter of “seeing.” Of using our eyes of faith.

Faith assures us that Heaven is transcendent. It is beyond the limits of our experience; it exists apart from our material universe. Heaven is also immanent in that it envelopes all the celestial bodies, swirling galaxies, and the starry hosts. If we believe that God is omnipresent, then we can at least believe that what the Bible in Ephesians 2:6 calls the “heavenly realms” are omnipresent as well. For

where God is, the Kingdom of Heaven is.

As I said, Heaven is closer than we imagine, even though we can’t see it. I can almost see God laughing at people’s propensity to fix their eyes only on that which is seen, when in Jeremiah 23:23-24, He reminds us,

One day, we will take the same trip as the dying thief. We will arrive in paradise. In the meantime, we can say we operate in the realm of our omnipresent and sovereign God. In some respects, we exist in the Kingdom of Heaven now.

We have already come to Mount Zion, to the heavenly Jerusalem.

We have come to myriad angels in joyful assembly.

We have come to God, the judge of all men. There’s a significant part of us, the new creature in Christ who lives in the present tense. Very much like our great I Am.

This fact makes the far and distant so near — oh, so close. When we seize this reality, we understand that the air we breathe is celestial. The ground we tread is sacred. The light we enjoy is divine. Could the rustling in the trees even be the whisper of angel wings? That’s touching on romanticism, but as the Bible itself says,

[We] have come to thousands upon thousands of angels in joyful assembly. — Hebrews 12:22

Everyone has questions about Heaven. Some things we simply won’t know until we get there! But, we do know that because God is omnipresent, Heaven is right here. What do you think of that? Come share your thoughts with us on our blog. We want to hear from you! ~ Devotionals Daily