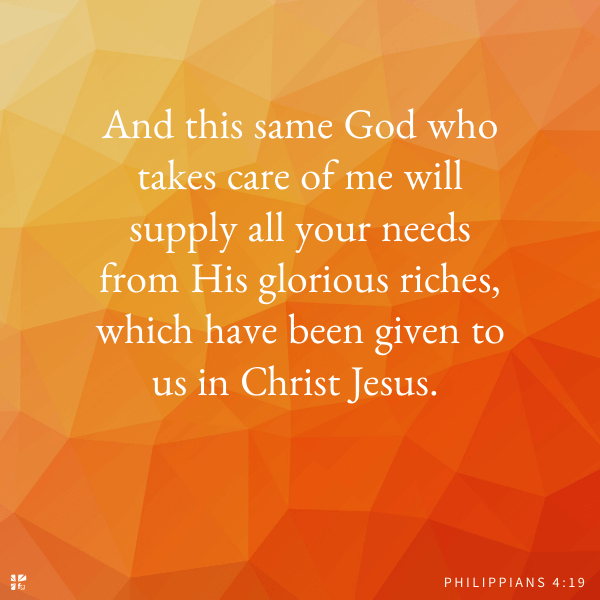 Worry does not empty tomorrow of its sorrow, it empties today of its strength. ~ Corrie ten Boom

When our daughter, Jenni, was pregnant with her fourth child, she and her husband, Andy, had three adorable daughters and were praying for a boy. I remember she even painted her toenails blue during her entire pregnancy. To our family’s delight Griffin was born on the last day of January. In our mind he was perfect in every way. I loved holding and talking to this little guy.

When he was about a month old, I started to notice that he wasn’t making eye contact. After a few months I finally said something about it to Jenni and Andy. They took Griffin to the doctor and he was diagnosed with ocular albinism, which means he doesn’t have all the pigment in his eyes and his vision is only about 20–200.

That initial diagnosis was devastating. We didn’t understand what this all meant for our precious little grandson. I found myself lying in bed every night worrying. Would he be able to ride a bike or play sports? Would he be able to drive a car? Would it limit his career?

And then the what-if questions would come. What if his eye-sight gets worse? What if he doesn’t recognize us? What if the other kids make fun of him? I prayed and kept saying I trusted God with Griffin’s life, but the feelings of worry were relentless.

I know I am a pastor, and I am not supposed to worry. I am supposed to be the one who encourages others to trust God regardless of their circumstances. I can preach sermons, I can quote scripture, I can recite eloquent prayers in the brightness of the day, but when the darkness of the night settles in, I have to admit there are times I stare at the ceiling, feeling very much alone and full of worry. I understand what Proverbs 12:25 means when it says,

Worry weighs a person down.

But now that Griffin is in grade school, I realize it was foolish to have worried so much. Griffin still has the same problem with his eyes, but he is doing well in spite of it. He runs, he rides his bike, he rides his hoverboard, and he attends public school. He’s just a typical kid excelling in all he does. My worrying about him didn’t change anything. It didn’t help him in any way whatsoever. It didn’t encourage him at all. It was a total waste of time and emotional energy.

What about you? Are you a worrywart? A nervous Nellie? Does your anxiety keep you awake at night? Do you fret about anything and everything from your health to your kids’ grades? Do you worry about job interviews, unpaid bills, rising gas prices, identity theft, or contagious diseases? (My newfound worry is book deadlines.)

Worries, doubts, and anxieties have become a normal part of life. Over the span of a lifetime, worry can add up to endless hours of wasted time and emotional drain that you will never get back.

In this book, I’m discussing worry as it’s defined by Merriam-Webster: “mental distress or agitation resulting from concern usually for something impending or anticipated.”1 Someone once said, “Worry is faith in the negative, trust in the unpleasant, assurance of disaster and belief in defeat… worry is wasting today’s time to clutter up tomorrow’s opportunities with yesterday’s troubles.”2

It’s important to note that there are times when the line between worry and clinical anxiety can become blurred. If you’re finding it difficult to manage on your own, I encourage you to seek the help of a trained mental health professional.

Now a lot of people think worry and fear are cut from the same mold, but they are not exactly the same thing. Fear is what you might feel when you are flying in an airplane and hear the plane is having mechanical problems.

Worry, on the other hand, is the anticipation of some experience. You keep asking what-if questions and manufacturing answers you don’t like. For instance, maybe every time you board an airplane you start to worry the plane might go down, even though the probability of that happening is very low. But while you are worrying, you are missing out on the world going on all around you. Erma Bombeck is credited with saying, “Worry is like a rocking chair: it gives you something to do but never gets you anywhere.”3 Simply put, worry doesn’t work; it’s stewing without doing. It’s like revving the engine of a car while it’s in neutral. It might use a lot of energy, but you are not getting anywhere.

So that means that 92 percent of our worries are unnecessary!

The sixth chapter of Matthew is a part of Jesus’ famous Sermon on the Mount. In this sermon Jesus showed people how following Him was going to differ from following the Old Testament Law. In fact, seven times in the chapter Jesus said, “Don’t worry.” Here’s an example:

That is why I tell you not to worry about everyday life — whether you have enough food and drink, or enough clothes to wear. Isn’t life more than food, and your body more than clothing? Look at the birds. They don’t plant or harvest or store food in barns, for your heavenly Father feeds them. And aren’t you far more valuable to Him than they are? Can all your worries add a single moment to your life? — Matthew 6:25-27

When Jesus commands His disciples not to worry about earthly things, such as food and clothing, that doesn’t mean he wants us to walk around starving and naked. It just means that instead of being distracted and preoccupied by material things, we need to focus on the things of God. Jesus is reminding us that God has promised to supply our material needs.

If I told my kids that from now on I would make their car payments, do you think they would ever worry about those car payments again? Of course not. They would no longer give it a thought because they know me, and they know I will keep my word. If that is true with me, how much more is it true with our heavenly Father?

Jesus also gave us an analogy using birds. Now I admit I don’t know a lot about birds, but I don’t think they do all that much. It’s not like the survival of mankind depends on a few birds getting enough to eat. And yet God feeds them. He said, “If I take care of the birds of the air, don’t you think you are a lot more important to Me than they are?” A few verses later He gave another example about flowers. Have you ever looked at the beauty of a flower, the detail that God put into making something that won’t last but a few weeks? This was his point: Animals don’t worry. Plants don’t worry. The only thing in all creation that worries is people.

While we all worry from time to time, it can take a toll on your health if it sticks around long enough. Something as small as a nagging concern in the back of your mind can affect your heart. It can make you more likely to have high blood pressure, a heart attack, or a stroke.5

Dr. Charles Mayo of the Mayo Clinic said, “Worry affects circulation, the heart, the glands, the whole nervous system, and profoundly affects the heart. I have never known a man who died from overwork, but many who died from doubt.”6

The Mayo Clinic actually estimates that more than 80 percent of their total caseload is directly related to worry on the part of their patients and noted that “52 percent of the people in the hospital could get up and leave if they could rid themselves of fear, worry and frustration.”7 Two meta-analytic studies conducted in 2000 found that the average child of the 1980s exhibited more anxiety than child psychiatric patients of the 1950s.8

We’re often like a patient in the psychiatric hospital, holding his ear close to the wall, listening intently. The nurse finally approaches and says, “What are you doing?” The patient says, “Shhh,” and continues listening. Finally, the patient motions for the nurse to come over and listen. She puts her ear to the wall for a long time and then finally says, “I can’t hear a thing.” The patient says, “I know. It’s been like that all day!”

Worry is a good indication that you have a misunderstanding of the heart of God. You feel like He’s not going to be there for you, and yet Paul wrote in Philippians 4:19,

And this same God who takes care of me will supply all your needs from His glorious riches, which have been given to us in Christ Jesus.

Isn’t it strange how we are willing to believe God to forgive our sins and save our soul, but when it comes to any other area of our life, we find it hard to trust Him?

Do you see how absurd that is? If you can trust God to forgive your sins and give you the promise of eternal life, don’t you think you can trust Him with every other area of your life?

Henri Nouwen gave an example of a lesson he learned about trust from a family of trapeze artists known as the Flying Rodleighs. He asked one of the acrobats how he knew that guy on the other side would catch him.

The secret… is that the flyer does nothing and the catcher does everything. When I fly to Joe [my catcher], I have simply to stretch out my arms and hands and wait for him to catch me and pull me safely over the apron behind the catchbar…

The worst thing the flyer can do is to try to catch the catcher. I am not supposed to catch Joe. It’s Joe’s task to catch me. If I grabbed Joe’s wrists, I might break them, or he might break mine, and that would be the end for both of us. A flyer must fly, and a catcher must catch, and the flyer must trust, with outstretched arms, that his catcher will be there for him.9

You don’t need to worry. God will catch you.

Excerpted with permission from Creatures of Habit by Steve Poe, copyright Steve Poe.

Are you worried? What are you worried about? Don’t you think God can handle it? He loves you! He’s in control! Give it to Him, whatever it is. Come share your thoughts on worry. We want to hear from you. ~ Devotionals Daily