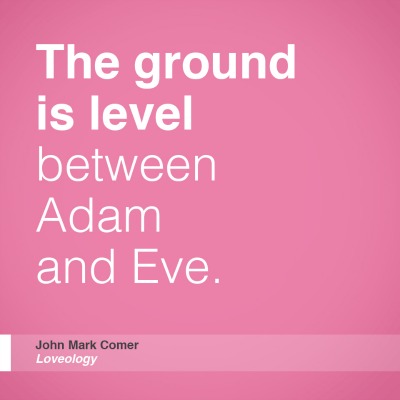 I’ve heard it said that Jesus was the first feminist.

It’s not a bad line. The way He treated women was millennia ahead of His time. And not just Jesus.

Historians think Paul was the first author in human history to argue that men and women were created equal.

There is neither Jew nor Gentile, neither slave nor free, nor is there male and female, for you are all one in Christ Jesus.

Nobody said that in the ancient world. Nobody says that in much of the modern world! Think about the difference between the role of women in the West, which has been deeply influenced by the church, and the Middle East or parts of Asia. Whatever side of the world you live on, the Scriptures are adamant.

Women are in no way, shape, or form inferior to men. We are equal in every way. But we are also unique.

In Adam’s poem in Genesis 2, he states,

She shall be called ‘woman,’ for she was taken out of man.

In Hebrew, it’s a wordplay. “She shall be called ishah, for she was taken out of ish.” It’s Adam’s way of saying, “She’s like me, but she’s not like me at all. She’s familiar, but she’s different. Strange. Unique.”

How are we different? Hmmm – dare I even try to answer that without degenerating into the stereotypes we all hate? Let’s throw a few softballs first…

One obvious example is biologically. The doctor said, “It’s a boy” seconds after I was born because I had… well, boy stuff. This wasn’t forced on me by culture. It was in my DNA from conception. Another example is function. My maleness is more than just anatomy. Men were made to implant life into women in ways that women will never be able to. And women were made to nurture children in ways that men will never be able to. That’s why you can’t separate gender from gender roles. They overlap too much.

Now, very few people would disagree with this. The questions are, “What does this mean? What effect, if any, should this have on how I live? On what I do? On my marriage? Family? Church? Culture at large?” Those are the questions we can’t seem to agree on. It’s tricky. How do we know which differences are hardwired by God and which ones are a social construct? There are all sorts of stereotypes floating around culture. Which ones are from God and which ones aren’t?

And it’s confusing because we’re caught in the crosscurrents of culture. One tide is saying there is no difference between the sexes and is working overtime to emasculate men and at the same time to erase the feminine side of women. The other current, which is just as strong, is pressuring us to fit into all sorts of stereotypes we don’t relate to.

Think of the saying, “Stop crying and be a man!” What’s unmanly about crying? Does “Jesus wept” ring a bell? And “be a man” —  what does that even mean? There are a ton of stereotypes of masculinity in culture, so which one should I “be”? Should I be the 007, stylish, tough, smooth, womanizing kind of man? Or the NASCAR, drink-a-six-pack-every-night-and-work-on-my-Chevy man? Or the mogul, power suit, I-have-everything man? Or the “my body is a temple” bro-man who spends every evening at 24 Hour Fitness looking at himself in the mirror?

So this is what it means to “be a man”? Going to Home Depot? Eating red meat? Driving a truck? Oh yeah, and whatever happens, don’t cry.

What if I like that stuff more than red meat and sports? In fact, what if I’m a vegetarian and I’m lousy at basketball? Does that make me less of a man?

And if anything, it’s worse for women. The spectrum of options is even broader.

Should you be the smart, educated, I-have-my-act-together professional, with just a little bit of makeup but not too much? Or the loyal, supportive, stay-at-home mom who packs her husband a brown-bag lunch every day? Or the tan, model-thin, aloof sex goddess that men trip over? Or the all-natural, outdoorsy, no-makeup-at-all girl who spends her days off hiking or juicing spirulina?

What if you’re none of the above? What if you’re smart and funny, and you want to start a business, but you also want to be a mom? And you like girl stuff, but you’re not a six-foot skinny fashionista? Does that make you less of a woman?

The answer is no. Not at all.

The trick is to eject the stereotypes imposed on you by culture while keeping your grip on the roles set in place by God.

So what are the roles? Once you clear away all the junk added in by culture, what’s left?

As I see it, the answer is more of a story than a letter on a multiple choice test. Here’s the short version. In the beginning God made male and female, but He made Adam first. He set Adam in the garden, all by himself, to “work it and take care of it.” We have no idea how long he was alone. A day? A month? A year? There were a lot of animals that needed naming.

This is interesting. Why not make Adam and Eve at the same time? Why wait?

In the Hebrew worldview, the firstborn was the heir to the inheritance. He was no better than the other children. In fact, God loved to go around the firstborn at times and bless the youngest, just to invert the order and show who was really in charge. But as a general rule, the firstborn would lead the family or tribe or nation.

The apostle Paul brings this up in the New Testament. Whenever he writes anything about gender roles and why men should step up and lead, he goes back to Genesis. Paul’s theology of gender roles is grounded in the creation story. He makes a big deal in 1 Corinthians 11 and 1 Timothy 2 about the fact that Adam was formed first. To Paul, there’s an order in creation. God ordered the world, and then he put Adam in it. Adam ordered the garden, and then he put Eve in it. And that order is the template for us to work off of.

Remember that the Genesis story isn’t just a one-off. Adam and Eve’s marriage is a paradigm for all marriages. That’s how I read it, in part because that seems to be how Jesus, and then later Paul, is reading it. If I’m right, that means Adam’s first-ness is more than a history lesson on ancient Hebrew culture. It’s a God-designed order to follow.

And if you think I’m reading too much into one story, there are other signs pointing in the same direction. Eve is made from Adam, from his “rib.” (Guys, don’t let this go to your head. You were made from the dust.) Then she is named by Adam. “She shall be called woman.” In the ancient Near East, naming was a sign of relationship and authority. Then at the end of the story, God states, “That is why a man leaves his father and mother [and his gaming system and free rent with his parents and his part-time job…]… and they become one flesh.”

Notice, it’s the man who does the leaving, not the woman.

As I read all this evidence, it points to the idea that the man was made to be the leader in the marriage relationship. To clarify, by “lead” I do not mean “domineer.” The word “lead” is so warped I’m not even sure if it works anymore. By “lead” I mean “give your life away for the good of another.” Jesus is the paradigm for leadership.

Eve is made as Adam’s ezer, his partner. She’s the one who comes alongside to get the job done. Her role is vital. Adam is incapable by himself. Without her, the whole thing falls apart. I repeat, she is indispensable. He is not enough all alone.

And just to clarify, everything I’m saying has to do with male-female relationships in marriage — not in culture at large. The Scriptures have nothing to say about who should be the president of the United States or the CEO of a company. This is about how we relate to one another from the wedding day forward.

Yet both men and women are called to rule over the earth (work) and be fruitful and increase in number (family). Man is just called to lead the way.

The man was made to lead, and the woman to be his partner, right at his side.

But notice how vague the “roles” are. There are all sorts of space and room and openness in how we express and live out this idea of the man as the leader and the woman as the partner. Other than the generic stuff about work and family, there’s so much freedom to work out your gender roles in your marriage, church, culture, and time. The Scriptures give very few specifics.

Who should do the finances in a marriage? Is it okay for women to work outside the home? How much? What about stay-at-home dads? How should a couple make decisions when they don’t agree? What if the husband doesn’t follow Jesus? The Bible doesn’t say.

So often we import cultural bias into the text and then claim it’s “biblical.” This happens all the time with gender, especially in the American church. The mid-twentieth-century American stereotype of Beaver’s mom stuck at home with high heels on all day long has absolutely zero grounding in the Scriptures. Read Proverbs 31. The archetype of a Hebrew wife isn’t chained to the kitchen stove. She’s an entrepreneur, a real estate investor, a generous justice advocate, a loving mother, and a fashionista who hits the ground running before the sun even comes up. It says nothing about an apron.

We forget that prior to recent history, men and women both worked. Usually the children worked as well. Only the rich could live on one income. The difference was that the family worked on the farm or in the shop, not in an office across town.

Still, we have to be really careful not to read our culture into the Bible’s commands. The Bible is transcultural. It was written at a specific time and to a specific place, but it’s for all time, all places. That’s why all the stuff about gender is at thirty thousand feet. There are barely any specifics on what a man and woman should and shouldn’t do in marriage, family, and the rest. Any of you who are rule people, I know you hate this. “Just tell me what to do!” I get it. But the Bible is that way by purpose, not by accident. That’s why it works for people all over the world, thousands of years after it was written down.

The gender roles are more of a trajectory than a list of dos and don’ts. They’re a compass pointing you in the right direction rather than a map.

We’re not unisex. We’re male and female. And that’s a good thing.

“There are all sorts of stereotypes floating around culture. Which ones are from God and which ones aren’t?” How do you answer those questions? How have gender roles played out in your family of origin, in your marriage, in your life? Come join the conversation on our blog! We would love to hear your thoughts! ~ Laurie McClure, Faith.Full