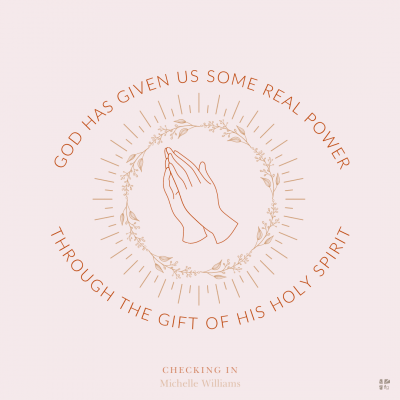 Let me tell you about one of my life’s little grenades that exploded because I wasn’t checking in with myself. Have you ever had someone do you dirty? (We all nod yes because duh.)

But I mean, like, have you ever had someone just wrong you? Betray you? I’m not talking about somebody who took your parking spot or said your dog was annoying. I’m talking about someone who yanked the rug out from beneath you. Then they rolled you up in that rug and tossed it off a cliff.

This one time I felt like I’d been literally cut. Cut so deeply that it was like slicing my finger with a sharp knife. Do you know what I’m talking about? That panicky sensation of a fresh wound? At first, you feel nothing but ice-cold numbness. You think, Oh man. When that starts hurting, it’s going to hurt. And when the pain finally sets in, you can feel it throbbing with every beat of your heart.

Well, I’ve been there. And in this particular situation, it felt less like a finger slice and more like an ax in my back.

I felt betrayed. That’s a strong word, I know. And in hindsight it was all probably just bad judgment on this other person’s part. But at the time, babaaaay, it felt raw. It felt so personal and intentional. It rattled me like I was an old, rusty cage. I was so torn up inside that I honestly thought I was losing it.

Before we get into the details, here’s my official disclaimer: the names and details of all my stories have been changed to protect the innocent… and the guilty.

I had a guy friend working for me whom I was very close with. Let’s call him Nathan. Nathan and I were basically family. And before I hired him, I called him up. Call it woman’s intuition, call it paranoia, call it whatever, but I remember calling him and just saying, “Hey, don’t do me wrong. Just do right by me, and we will have a very successful working relationship. I’ll be good to you.”

And Nathan did a great job. He was thorough, sharp, and thoughtful. Then one day, I got an email from Nathan. Only, this email didn’t come from his regular work email address; it came from another work email address. Like: YourLyingEmployee@YourCompetitor.com

Well that can’t be right, I thought. He works for me.

But not only was this another work email address, it was the business of a very close friend of mine who happened to be in the same industry as me. My friend who also had no idea that Nathan was actually supposed to be working for me and just me.

Honey, I saw red. I was so hurt, so angry, so mad. It felt like Nathan used me to get somewhere else. Somewhere that was, in his mind at least, better and greater than working for me.

When you work in my field, you get this a lot. Users. I feel like I always have to watch my back and be on high alert for people whose intentions are less than honorable. It’s exhausting.

Anyway, Nathan’s actions reinforced some of my most crippling insecurities at that time — that I was just a stepping-stone to the next, better thing. And I didn’t know how to deal.

So I did what you would probably do. I told my mama on him. And I remember knowing that I was a little more freaked out than the situation called for, but I was no longer in control of my reactions. I couldn’t calm down. I couldn’t get ahold of my thoughts, emotions, or myself. I went from raging mad to stonily silent. I paced. I couldn’t sit still. My mind was racing. I cried angry tears.

I was like, “Who can we call to fix this? What’s our game plan? How can we retaliate?”

Mama just looked at me. You know the look. The look that I could read. It said: We ain’t doing anything about this, child. You’ve got to handle yourself.

My mama is an incredibly wise woman. She saw that there was something very not right with me. But instead of telling me I was acting like a crazy person, she told me as kindly but firmly as possible that it was time I went and saw a professional.

Basically, Take some personal ownership, Michelle. Like, Maybe this is less of a Nathan problem and more of a Michelle one.

At the time, I had never been to formal counseling before. Where I came from, church was your therapy. I figured only rich white people got professional help, and that wasn’t me. We weren’t poor or anything, but I had grown up in a very middle-class home. I didn’t even know that insurance covered a good portion of each session — I was clueless.

But my mama said I needed to go, and my mama is not someone I like to cross to this day. So I went. And the direction of my life was changed forever. For one, therapy helped me avoid going to prison for assault and battery charges. And two, my counselor, Sandy, helped me see that yes, in fact, my rage over the Nathan deal had become some- thing way bigger than it should have been. Like, my reaction should have been a 4 out of 10, and it was a 10 + 10 + 10 out of 10.

Without checking in, I had become completely unaware of myself. I was on autopilot. And the flight plan was beginning to look like a kamikaze mission.

Let me explain it this way: Have you ever had a bruise that you didn’t realize you had? You banged your shin on the coffee table and just forgot about it? You don’t even remember you’re hurt until a little pressure is put on that same area. And then, boy oh boy, do you remember. It hurts — it stings!

I didn’t know I had such a bruised heart until Nathan pressed down on my untended wounds.

And if you would have asked me how I was doing at that time, my surface answer would have been, “Fine. Okay. Just doing life over here.” You know? But the truth is, I wasn’t being honest with myself. I wasn’t taking the time to evaluate anything on an authentically deep level. I wasn’t checking in.

Sandy and I would go on to spend hundreds of hours together. But it was in that first session that I learned it was my responsibility to keep a watch on my own heart. Like, Oh, you mean I’ve got to do some work to stay healthy? Duh, Michelle. Duh.

Together, Sandy and I started digging away at the dirt of my experiences. We talked about the situation with Nathan, but it was obvious that he wasn’t the real issue. The real issue was what had caused me to stop being aware of what I was feeling in the first place. When did I stop feeling like myself? When did I become a person who would fly into a fit of rage over something petty?

With Sandy’s help I began excavating those hardened places I had unknowingly built around my heart. And what I uncovered was something I think I had known deep down for a while but had never been able to admit. I suffer from depression. Real, clinical, need-to-be-medicated depression.

Depression is an assassin. It acts like a silent, slow killer. And if you don’t deal with it, it can swallow you up.

And that’s where I was the first time I walked into Sandy’s office. My depression had me so disconnected, so numb, and yet, so short-fused. I was more than a train wreck; I was an earthquake waiting to happen, and everybody in my life was walking up and down my fault lines, risking receiving either my rage or my numbness with each interaction.

I remember the first time I realized there was something off with my emotions. I was in junior high school, around seventh grade. I kept feeling like something was different about me when I compared my behaviors and emotions to my friends’. I knew that I was kinda sad all the time, but I couldn’t tell you the first reason why. I was isolating myself, losing interest in things I used to love, and my grades started dropping.

Classic symptoms of depression. But I didn’t have a name for it. I didn’t feel like I looked like a person who would be considered depressed, you know? But of course, I’ve learned that depression does not always have a look.

Then, in my twenties, while I was still in Destiny’s Child, I remember telling someone on our team at the time, “Hey, I feel like I might be depressed.” And he was like, “What do you have to be depressed about? You guys just signed a multimillion-dollar deal. You’re about to go on tour. You guys are about to release your own Barbie dolls.”

I mean, who gets a Barbie doll replica of themselves but can barely find the motivation to get out of bed every day?

By the time I got my actual diagnosis of clinical depression, I was thirty years old. Do I wish I had known sooner? Of course I do. But that wasn’t what happened. God was still there. He knows all about depression. And no, it’s not that being depressed is a sin.

Y’all should read the Bible. It’s good stuff, I’m telling you. Because we’re out here in the twenty-first century thinking that we invented this depression stuff, that it’s a modern problem. But that’s not true. Even the Bible talks about the idea of having a sound mind:

For God did not give us a spirit of timidity or cowardice or fear, but [He has given us a spirit] of power and of love and of sound judgment and personal discipline [abilities that result in a calm, well-balanced mind and self-control]. — 2 Timothy 1:7

You lost a job. Your man left. Your child was born with a diagnosis. A loved one passed away. God didn’t answer your prayers the way you thought he would. Someone you looked up to disappointed you.

At some point, you stopped asking yourself the hard questions:

Are you checking in? God didn’t create us to leave us in depression and despair. He doesn’t want us to feel disconnected and alone. He created us for community and wholeness! Out of love and for family. Who do you need to connect with today? ~ Devotionals Daily