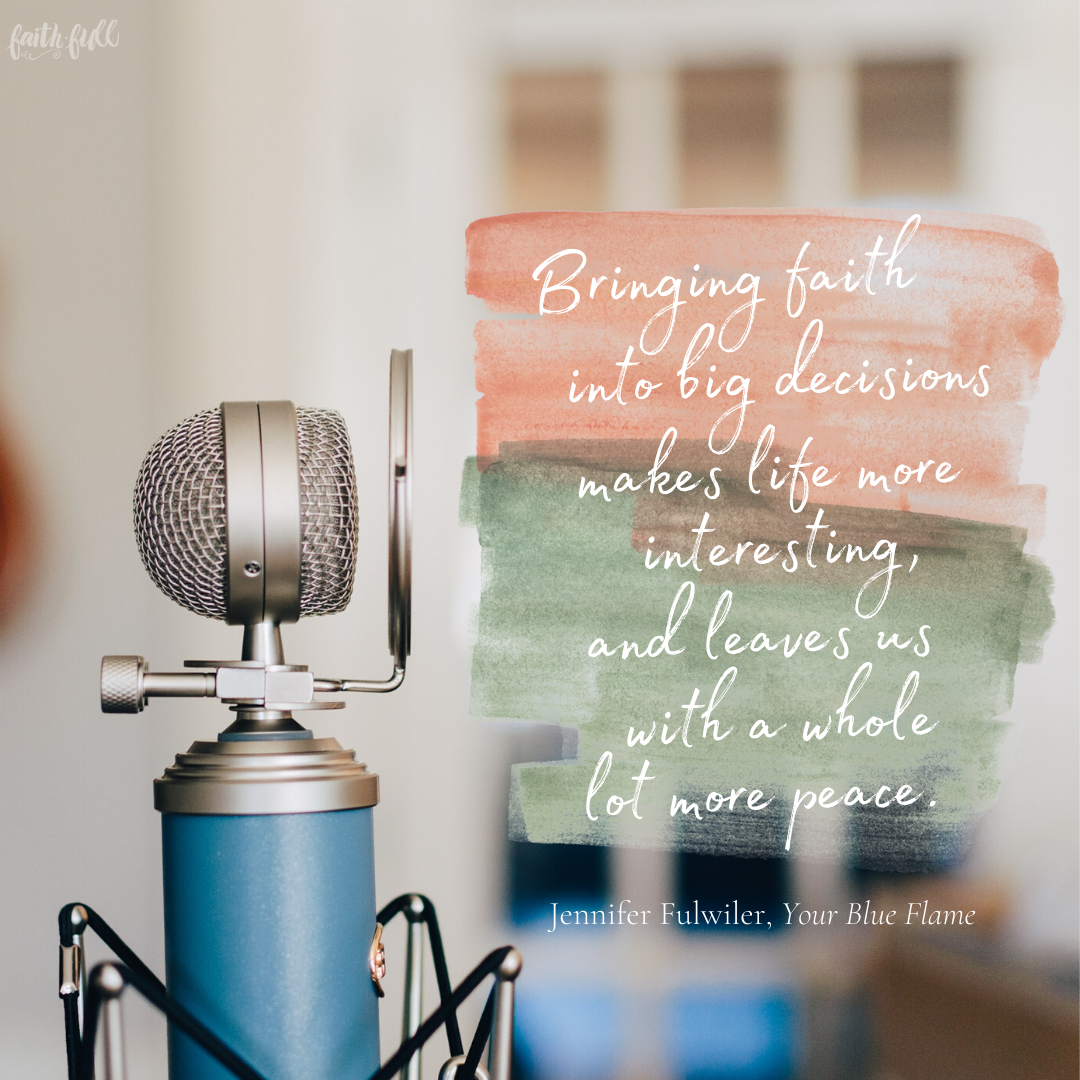 Have you ever noticed that you’re more courageous when you’re acting on behalf of someone else?

In college I had the privilege of interning for an executive who was as bold as she was successful. She ran her department at a tech company with precision, and she was a force in our local community. It was my job to make the phone calls that enacted some of her big moves. I’d be the one who called the gala dinner event where she was receiving an award to tell them she needed four extra tickets at the last minute and that, yes, we knew the event started in two hours. Or I’d sit down at my desk to see a handwritten note asking me to call a vendor to tell them she was cutting her next order in half because their prices were too high.

These calls were often contentious. I am as non-confrontational as can be, but the conversations caused me little stress because none of it was up to me. If any of these moves ended in failure or strife, I wouldn’t take it personally. I was just the messenger.

At one point a business associate of my boss became so frustrated with one of her demands that he raised his voice at me. I had my feet up on the desk, my head tilted back in a relaxed pose. His invectives grew more forceful, but I didn’t change my posture.

He concluded his angry rant by demanding to know, “How could you make such a dumb decision?”

Even though a powerful man twice my age was hurling a lot of heated words at me, I was unbothered. I shrugged, feeling calm and free. “Sir, this wasn’t my decision. I’m just the intern,” I said.

If you do it right, following your blue flame can give you that same freedom of being “just the intern.”

One of the greatest examples of this is the transformation I’ve seen in my husband. Joe is wired not to take risks. He’s a CPA. He’s a lawyer. These are not personality types that are typically okay with making decisions based on anything but hard numbers and printouts of meticulously calculated data. And that was how he used to operate. When I first met him, he hesitated to make any move that didn’t seem perfectly calibrated for success. In fact, I’ve always suspected that he had a spreadsheet with weighted values to decide whether he should propose to me.

Over the years, Joe has embraced the idea that the direction our lives go is not entirely up to us, especially when it comes to our blue flames. Not long ago, as we were pulling together this standup comedy tour, I ran out of money in my business bank account. We were self-producing the entire tour, and I thought I had saved up sufficient funds for the initial investment. I hadn’t.

On a warm summer night, I pulled up a lawn chair next to Joe on our back porch, and I told him that my business account was empty. There were ushers’ fees and insurance payments due to a big venue, and I would have to put those on our personal credit card. I’d have to do the same for the entire rental costs of two more theaters. I was nervous as I spoke. If I couldn’t sell tickets to these events, we’d be in trouble. It would take us a long time to bounce back from the financial hit.

Joe had been fully supportive of our self-producing this tour, but I worried that this news would push him over the edge. Instead, he said casually, “That’d be scary if it were our money.”

I chuckled, relieved but confused. “What do you mean? It is our money.”

“That’s not how I think of it,” he said. “All of this is up to God. It’s His tour. It’s His money. Whether this project succeeds or fails, He has a bigger plan than we can see. I’m just along for the ride.”

Joe is a graduate of Stanford’s business school. He is highly trained to think only in terms of data and certainty. If his classmates heard him talking like that, they’d probably suspect he was on drugs. And of course his statement was a bit tongue-in-cheek. We had spent months hammering out a business plan that we assumed would eventually get us back on track, and that undoubtedly contributed to his seemingly saint-like calmness. Yet over the years, he’s found that bringing his faith into his big decisions makes life more interesting, and leaves him with a whole lot more peace.

The night before tickets went on sale, I was terrified. This tour had seemed like something we were meant to do. We had done our best to create that same alchemy that Chip and Joanna Gaines bring to their business decisions: a mix of following where God seems to be leading with a pinch of coldly rational analysis stirred in. We had financial projection spreadsheets and a solid plan. But what if we missed something? What if it was all a mistake? When Chip Gaines was asked whether he ever gets scared when he makes a big move, he said, “Always. Anybody that says otherwise is a liar.”1 Boy was I scared.

The next morning, I launched the website for the tour. I announced it on Instagram and Facebook and my radio show. I almost cried with relief when the ticket sales poured in. Within a week almost half the venues were sold out.

Of course, new pressures popped up. There were endless logistical issues to take care of to make each event a success. I was under enormous pressure. I was embarking on a national tour where I was the producer, the promoter, and the performer — with the entire thing predicated on my promise that I would make people laugh. When I faced moments when it seemed like it was all too much, what kept me sane was adopting Joe’s mentality that this was something we were meant to do as much as it was something we wanted to do. I slid back into the attitude I had when I was simply taking orders from another wildly interesting boss. I’d shrug as I thought, I’m just the intern.

I found out that Jim and Jeannie Gaffigan had decided not to do any more seasons of their TV show because my texts blew up. People know that I’m friends with Jeannie, and when the news hit the wires, everyone wanted the scoop: “C’mon, Jen. What’s the real reason they’re not doing the show anymore?”

It seemed crazy: the first two seasons were big successes. The Jim Gaffigan Show, a sitcom based on the Gaffigans’ life and starring Jim himself, was hailed by both fans and critics as being hilarious. The network did not cancel it. So when the Gaffigans said, in so many words, that they weren’t doing the show anymore because it didn’t feel right, some people assumed either that they were lying or they’d lost their minds. People speculated that they must have had a falling out with the production company or the staff. At the very least, surely there must be a juicy personal scandal at the core of this.

None of that was true.

Shortly after the announcement, Jeannie came on my radio show while I was broadcasting from SiriusXM’s New York studios and we talked about this huge decision. Jim’s main blue flame is comedy. Two of her blue flames are producing and writing. As much as they loved the work they did on their TV show, it no longer felt like this was how they were supposed to use their talents. They had practical reasons to quit, like the fact that they had a lot to juggle as parents of five kids. But much of the decision came down to how they felt God was leading them. So they wrapped it up.

Here’s where the story gets interesting.

The next March, when Jeannie would have been hard at work on the show if they’d continued it, she took her kids to the pediatrician to get forms filled out for camp. If the production of season three had been in full swing, she wouldn’t have had time to go to this appointment. When she was working on the TV show, she didn’t even have time to take care of her own health. At one point she sprained her foot and had to borrow crutches from the props department instead of seeking medical care, because she was too busy to leave the set.

Now she had more time for things like taking the kids to this doctor visit. While she was there, the pediatrician noticed that Jeannie didn’t hear a question. “Sorry, I can’t hear out of one of my ears,” Jeannie said nonchalantly. The doctor stopped and changed the focus from the kids to her. After a few more questions, she told Jeannie to seek follow-up care immediately.

Because of that chance interaction, Jeannie was diagnosed with a brain tumor. It was the size of a pear, and it was on her brain stem. The situation was so grave that even a sneeze could have killed her. She was rushed into emergency surgery and endured months of a grueling recovery. She barely made it out with her life.

When she first told me how this diagnosis came about, it took me a moment to connect it to their quitting the show. When it all clicked, my jaw literally dropped.

Jeannie bluntly said what had just occurred to me: “Had we done season three, I would be dead. No doubt.”

When you let your blue flame connect you to God, you will seem crazy to outsiders. You’ll have more peace than you could find in a thousand pages of plans and spreadsheets. You’ll stumble into opportunities you never could have arranged on your own. You will make sacrifices that others would never make. You will make decisions that would surprise even you. And one day, like what happened with Jeannie, one of them might even save your life.

When you’re following God, when you listen for His direction, when you do the opposite of what would be “smart” and go for what He says to do, you might feel crazy. Do it anyway! Have you ever followed God’s voice and realized being “the intern” for Him is the best way to live? Come share with us on our blog. We want to hear from you! ~ Laurie McClure, Faith.Full