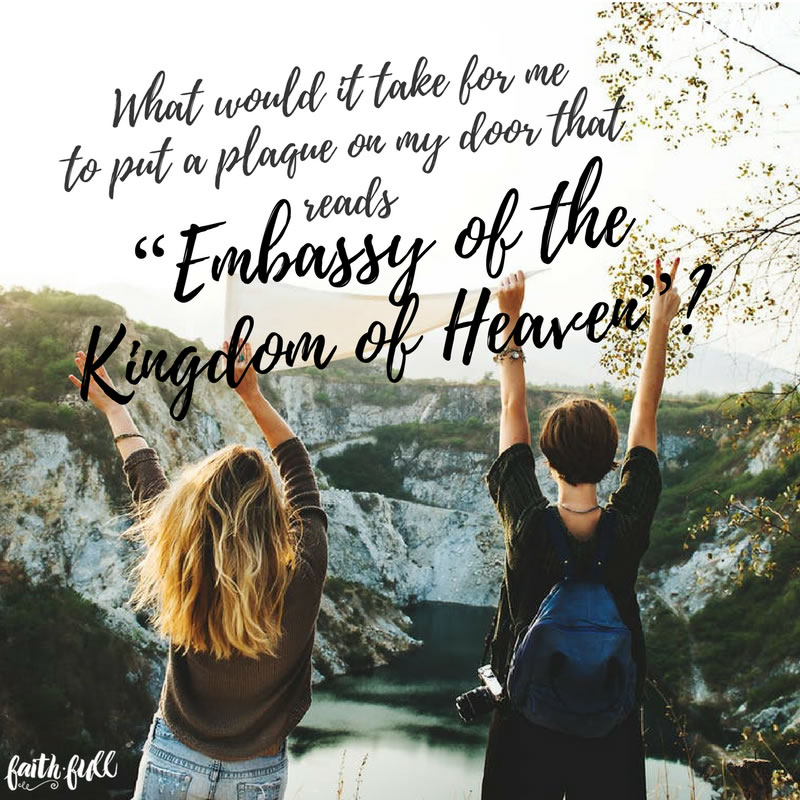 Walking with a friend in the dark is better than walking alone in the light. — Helen Keller

During [a] frazzled time of life, I managed to squeeze in a conference in my hometown of Austin, Texas. I was drawn to the Verge Conference for people living out the gospel in community, which was exactly what I was longing to do. The Austin Music Hall was jam-packed. Each speaker took the stage for fifteen minutes. The lights went up; they gave their talk. The music started; the lights went down. The routine was fast, like a Twitter stream, pouring out information on discipleship in fifteen-minute chunks.

Then the dark stage lit up, shining on Jo Saxton, a respected leader who speaks on helping people see better how to live in community with one another. She wooed me with her British accent, delivering the line that changed everything:

Right there, in the middle of the Austin Music Hall, surrounded by 1,200 people, I had a major spiritual meltdown. Then, on massive screens flanking the stage, a documentary started. The film shows an elderly woman walking slowly down cobblestone streets. She enters a food market. The subtitle says, “Ludmilla’s Story.”

As I watched the film, I “met” Ludmilla, an eighty-four-year-old widow in Prague. She’s survived two totalitarian regimes and lives in the heart of the most atheistic country in Europe. Yet she placed a small bronze plaque on the outside of her tiny brownstone apartment that reads “Embassy of the Kingdom of Heaven.”

The Ministry of Presence

Every day Ludmilla opens her home to friends and strangers who need to talk. Sometimes she knows the people who come. Sometimes strangers show up — led by word of mouth. She offers them something small, nothing overdone or extravagant. Tea. A cookie from a tin. A warm, simple gesture of welcome to her table. In a way that is quiet and genuine, Ludmilla listens and prays, and in doing so communicates that her guests matter. At her table, they belong.

God answered my prayer to see how to love my neighbors with the story of a woman half the world away who was being the hands and feet of Christ. Her actions were so simple — the antithesis of the frazzled lifestyle I was living. Ludmilla modeled how simple hospitality could be through her ministry of being present. I could see it. Maybe now I could be it.

What would it take for me to put a plaque on my door that reads “Embassy of the Kingdom of Heaven”?

I’m still the same old me. The person who makes things harder than need be, planning too much, focused on the outcome, trapped in the minutiae of the doing rather than loosening my tight grip on control and resting in the being. But I was beginning to see the vast difference between entertainment and hospitality.

I needed a change of heart. Am I fully present? Are my motives for hosting self-serving or genuinely out of care, concern, and love? Am I more concerned with Kristin or with being an ambassador to the kingdom?

I really want to be like Ludmilla. Actually, I want to be a guest at her table! She’s a beautiful role model of hospitality. I want to have a simple table spread with abundant love. To offer an atmosphere of joy and peace.

A Change of Heart

As my heart began to change, pieces of my life started to feel as if they had purpose. Maybe the summer in France with the longing for the table, my new home, and my promise to keep the tradition of neighborhood community going could be melded with the vision of this woman a million miles away to create the kind of inspired hospitality I could live out.

The realization hit me: I’d been making it so hard, spinning around on a hamster wheel instead of sitting still, like Ludmilla, focusing on being present. I was doing instead of being, trying hard to execute community, and it seemed so contrived. Ludmilla pointed back to the promise, to the party. Ludmilla took me back to that table in France and its comfortable, leisurely interaction. The Party at the Cove and Ludmilla’s presence were beginning to show me how gathering people at a table can help them belong.

If we have no peace, it is because we have forgotten we belong to each other. — Mother Teresa

But what could I do in a suburban neighborhood in Texas that would offer the same experience Ludmilla was providing in her tiny Prague apartment? I don’t have the time Ludmilla does to be available to people throughout the day, so I knew whatever I did would look different. But I could feel my heart shifting from confusion to possibilities. I still didn’t have the precise answer, but hope was born.

Let’s get real. Neither you nor I have very much in common with an eighty-four-year-old woman in Prague. But that doesn’t let us off the hook. Romans 12:13 remains the same no matter where you live or what stage of life you’re in. You might live in a gated community, apartment complex, rural area, city, or suburb. Maybe you’re single or a grandmother or a mother of eight. Whatever your situation, how can you be present for others? What simple ways can you let people know they matter and create space for people to belong?

Ludmilla took every opportunity to open her home and life to others. It wasn’t hard. She didn’t consult Pinterest. She wasn’t frazzled. She was simply open to the people who came to her, making them feel they belonged, right where she lived.

I could feel I was on the verge of doing this too, but God knew I needed one more little push. He gave me a dare.

Is God daring you and me, too? Do you know your neighbors? I know some, but not everyone on my block. But, I want to know and love others well as you probably do. We may not all have a turquoise table, but we can open our door and talk and share Jesus with others, right? Come share your thoughts with us on our blog. We would love to hear from you! ~ Laurie McClure, Faith.Full