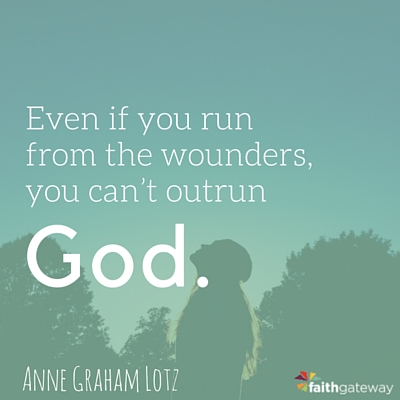 The angel of the Lord found Hagar near a spring in the desert; it was the spring that is beside the road to Shur. And he said, “Hagar…” — Genesis 16:7-8

Although Hagar was not aware of it, God cared about her also as she ran from her wounders. As her sandaled feet moved swiftly over the rough, rocky terrain that emptied into an endless desert, I imagine she must have felt lonely, confused, terrified, and angry.

I expect she mentally replayed the scene with Sarah over and over again. Maybe she even had an imaginary confrontation: Just who do you think you are? Your name might mean “princess,” but you’re nothing but a bitter, barren old woman. As for sleeping with your husband, do you think I enjoyed that for even one moment? I was just doing my duty. Now I’m carrying his child, which is more than you could ever say. And you’d better not follow me or I’ll run and run and keep on running until I’m so far away you will never find me. And the old man will never have his baby.

One reason I think Hagar may have had an imaginary confrontation with Sarah is that I often rehearse imaginary conversations with my wounders, honing my words like knives on flint until they are not only sharp, but seem brilliant to me. Of course, as my words get sharper and sharper, I find myself feeling angrier and more justified in self-pity or in plotting revenge. Although I would never speak the words out loud, they shred my inner peace because they keep my focus on “them,” and what they did to me.

Instead of having an imaginary conversation with myself, I would be better served by pouring out my heart to God in prayer. Yet I have discovered that while I may have an endless supply of angry words for a one-sided conversation in my mind, I find myself at a deplorable loss for words in prayer. When that happens and I struggle for words, I often turn to David’s prayers in the Psalms and use them as my own. For example,

Give ear to my words, O Lord, consider my sighing.

Listen to my cry for help, my King and my God, for to You I pray.

In the morning, O Lord, you hear my voice; in the morning I lay my requests before You and wait in expectation…

The arrogant cannot stand in your presence; You hate all who do wrong.

You destroy those who tell lies…

Lead me, O Lord, in your righteousness because of my enemies —

Make straight Your way before me.

Not a word from their mouth can be trusted…

Let their intrigues be their downfall…

But let all who take refuge in You be glad; let them ever sing for joy.

Spread Your protection over them, that those who love Your name may rejoice in You.

For surely, O Lord, You bless the righteous; You surround them with your favor as with a shield. — Psalm 5

David’s honesty in his prayers resonates with my heart. Often he begins his prayer complaining, crying out, expressing anger toward his enemies, but invariably he ends his prayer with praise of God. You can almost pinpoint the place where his focus changes from “them” to “Him.”

I know by experience what David knew. Prayer can help heal your hurt. It can take the sting away. One reason is that it can help put your wounding in perspective. When I focus on God and who He is, my wounders don’t seem so intimidating and my hurt somehow becomes smaller.

So may I encourage you? Put the brakes on any runaway mental conversations you may be having with those who have wounded you. If you don’t, and those sharp words careen recklessly across the highway of your healing journey, your wounded heart and life are going to end up as something like splattered roadkill. At the very least, you will delay, and perhaps even deny, the healing God wants to give you.

And while the damage may not be readily apparent to anyone else, you will miss out on the blessing and purpose God has for you.

Maybe you are not having any imaginary conversations — no one-sided, mental confrontations with your wounders. Instead, maybe you are having actual conversations… but with others, not with the ones who hurt you. Perhaps you have gravitated to people who have also been wounded. As you repeatedly open your wounds to sympathetic ears, you begin to feel not only supported and encouraged, but also justified in your hardness of heart. It’s as though your deterioration into a bitter, angry person is not only something you can blame on the wounder, but also a means of revenge. You want others to know how bad that person has been by showing them how miserable you are. It reminds me of an old saying:

Bitterness is like drinking poison hoping the other person gets sick.

Who have you invited to “drink the poison” with you? How long is the guest list for your pity party? Are you gathering an audience to listen to your angry complaints, witness your heated tears, and stir up the same outrage you feel for the offender? Unfortunately, pity parties never result in authentic benefit or blessing; they just enlarge, deepen, and intensify the wound by repeatedly exposing it. At the very least, these kinds of discussions with others will keep you focused on your hurts instead of focused on your Healer.

Hagar’s focus was definitely not on her Healer. She was running. And she was running on “the road to Shur.” (Genesis 16:17) That was the road to Egypt. Hagar was going back. Back home to her mother. Back home to the familiar pagans of Egypt. Back home to where she used to belong. She reminds me of the apostle Peter, who went back to his prior life of fishing after his dismal failure as a disciple when he denied his Lord. (John 21:3)

When we fail at trying to do the right thing, or live the right way, or say the right words, or be the right person, or fit into the right fellowship, we often just want to give up and say, “I can’t do this. I’m going back to the life I used to know.” The familiarity of a former way of life, or old friends, or previous habits can seem to be comfortable at a time when we’re rejected or wounded by God’s people.

The “world” of Egypt seems safer than the “church” of Abraham’s tent. But going back only increases our misery, doesn’t it? We can’t go back. Not really. Because we can remember what it was like to be in God’s presence and to be part of His family with a greater purpose to life than just living for ourselves. Yet we find ourselves in a Catch-22.

We don’t really want to go back to our former way of life, but we don’t feel we fit in with God’s people either. Which is why God Himself needs to show up.

It was at this miserable moment on the road to Shur as Hagar was not only running away, but running back, that God showed up and taught her a profound life lesson:

Even if you run from the wounders, you can’t outrun God.

As she ran, her heart must have been beating out of her chest. Her breath must have come in shallow gasps, either from the physical exertion or the panic she surely experienced when

the angel of the Lord found Hagar near a spring in the desert. — Genesis 16:7

God did show up! Hagar wasn’t alone after all. He was there. Right there. Because God cares. He came to her as “the angel of the Lord,” a mysterious description of Him as He appears suddenly, unexpectedly, and seemingly out of nowhere from time to time in the Old Testament. God is described as the Angel of the Lord when He wrestled with Jacob by the Jabbok River, leaving him both blessed and limping. (Genesis 32:22-32)

He was described in a similar fashion when He confronted Joshua outside of Jericho, told him to take off his shoes because he was on holy ground, and then told him how to overcome the enemy fortress. (Joshua 5:13-6:5) He appeared to Gideon in this way, appointing him as the deliverer of His people when he was hiding from the Midianites in the winepress. (Judges 6:11-12) Again and again this intriguing figure appears throughout the history of Israel. Scholars agree that the Angel of the Lord is a “theophany,” or an appearance of the pre-incarnate Son of God. Astoundingly, He is Jesus before Bethlehem! Who can fathom the magnificent grace of God in that the very first time we encounter the visible Son of God is right here, at the spring beside the road to Shur, revealing Himself…

to a woman not a man;

to a servant, not a warrior;

to an Egyptian, not a descendant of Abraham;

to a sinner, not a saint;

to an outsider, not an insider.

What an undeserved, compassionate intervention of the Creator in the life of one wounded woman. He intentionally sought and found her — while she was running!

Why? Why did God go after Hagar? Why didn’t He just let her run away, die in the desert, have a timely miscarriage, or return to Egypt where she would never have been heard from again? Having Hagar out of the picture would have solved a lot of problems in Abraham’s household. So why didn’t God simply dismiss her as Abraham had done?

The incredibly wonderful, amazing answer is because God loved Hagar! God felt her pain even though it was provoked by her own arrogance. He cared so much about the wounds inflicted on a pregnant Egyptian servant that He left His throne in heaven and ran after her, pursuing her right into the desert. While God chose Abraham as the one through whom He would uniquely bless the world, Hagar represented the world that He wanted to bless.

God loved Hagar as much as He loved Abraham!

This is a truth to wrap your heart and mind around, especially in a world that sometimes thinks God cares more about…

the churched than the unchurched,

that He cares more about us than them.

God cares about each of us and all of us — period! And because He really does love you — He really does care about you — you and I can run, but we can’t outrun Him.

Wherever you are, whoever you are, David’s God — the God of Hagar — is right there. If you can still the racing beat of your heart, quiet your frantic thoughts, silence those imaginary conversations, listen carefully with the ears of your spirit, then you will begin to hear His voice. I think I can hear Him now, calling you by name…

Are you running away from God? Do you know how much He loves you? That He calls you by name? Why not stop and turn to Him with your hurts, fears, and anger today? Come join the conversation on our blog! We want to hear from you! ~ Devotionals Daily