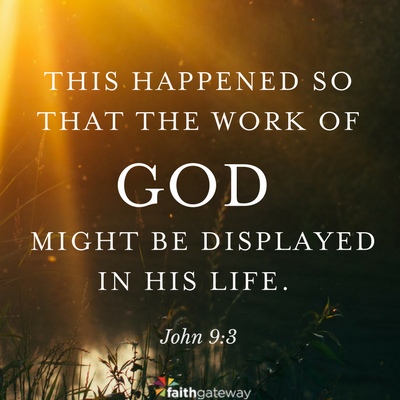 Editor’s Note: It’s Sit & Listen Saturday at Devotionals Daily. Enjoy reading as well as listening to this devotion from The Christian Atheist by Craig Groeschel. Listen on the blog below or on your Alexa device by enabling the skill and then prompting, “Alexa, ask devotionals to read today’s devotion.”

When we don’t understand something about God, some people are tempted to discredit him completely. My friend Andy Stanley said, “You don’t have to understand everything to believe in something.” In John 9, Jesus met a man who was born blind and forced to beg just to get by. Jesus’ disciples wanted to know whose fault it was that the man was blind: Was it his fault? Or his parents?

For some reason, it’s human nature to place blame. For example, if someone gets cancer, some Christian Atheists might wonder, What do you think they did to deserve cancer? If someone’s wife walks out, insensitive churchgoers might think, If he had been a better spiritual leader, his wife wouldn’t have done that. If a teenager is rebellious, hardened onlookers might privately reflect, If that kid’s parents had been more involved, this never would have happened.

When the disciples wondered who to blame, to their surprise Jesus answered,

Neither this man nor his parents sinned… but this happened so that the work of God might be displayed in his life. — John 9:3

This man had spent years enduring the hardships of a life without sight, and Jesus basically said that God would be glorified through this tragedy. God can have a purpose in our pain.

Just because God can use what happens doesn’t mean he causes everything. God does cause some pain (Heb. 12:7 – 11 talks about God “disciplining” his children), but much pain — especially that caused by the sins of other people — is not caused by God. He may allow it, but he doesn’t cause it. That’s an important distinction. Recognizing this fact might still leave us angry with him (and I’m guessing he probably understands when it’s a person in pain). We learn to overcome this anger as we get to know God. And as we do, we learn how to trust that he is still good, loving, and wise in everything he does, even if we don’t know why things happen.

Purpose in Our Pain

Even though many things in life will always hurt and be unexplainable, God occasionally (perhaps often) shines purposeful light into our darkness. If you’re hurting right now, that might be difficult to believe. You might be in a place similar to where Michael and Andrea were when they lost their newborn child. Andrea begged me not to tell her that her baby died for a reason. In the moment, her objection to being given a reason was understandable, completely justified. But after a season of grieving, many find comfort in knowing that God can use even tragedies to bring about good. In fact, Ephesians 1:11 makes a bold statement:

[God] works out everything in conformity with the purpose of His will.

This is precisely what God did in the story of the man who was born blind. When Jesus saw him, He spit on the ground, made some mud with the saliva, and put it on the man’s eyes. That doesn’t make sense to our limited minds, and the man’s lifetime of blindness up to that point certainly wasn’t fair. But after washing in the Pool of Siloam, that man went home seeing.

This is the place where the story should reach its climactic ending. “Woo hoo! The blind guy can see now. Let’s throw him a party. We’ll eat cake and ice cream.” And there was great rejoicing.

But that’s not what happened. Jesus had performed an incredible miracle, but the Pharisees (religious leaders) wouldn’t buy it because Jesus had done it on the Sabbath.

Pharisees know: you can’t work on the Sabbath. And everybody knows: healing is work. Because they didn’t understand, they refused to believe.

After a great commotion, the Pharisees subpoenaed the previously blind guy to ask him some more questions. With blunt honesty and clear sight, he said,

In other words, “Look guys, there are many things I don’t claim to understand. But one thing is undeniably true: I was blind and now I see!” As a struggling Christian Atheist, I have my doubts and questions about God, but I’m thankful that just like the blind guy who was healed, I don’t have to understand everything to believe something. If you’re grieving, I pray that one day in the future, God will show you some purpose and meaning for your pain.

Life out of Death

On Christmas Eve in 2004, David Fox was admitted to the hospital. David was thirty-four and married, the father of one son. Even as David’s health declined, hundreds of faithful Christians prayed for him, believing God for his full recovery. Certainly God would heal this passionate worship leader, godly father, faithful husband, and friend. We were all convinced David would come home.

David wasn’t just some guy at my church. He was my wife’s only brother. Losing him was very personal to our family.

To say that we questioned God would be a massive understatement.

Why would God allow this? Why would God take someone so young? Why didn’t God answer our prayers? What did any of us do to deserve this? Where is God in our pain and loss?

We grieved deeply, as you’d expect. The time at the funeral home was kind of a blur. I remember unlimited hugs from loved ones and unstoppable tears. I’ll never forget when David’s dad and my father-in-law, Sam, said to me, “Your children are never supposed to go before you.” Losing his son brought this strong man to his knees. I prayed that I would never know the pain of losing a child.

At David’s funeral, in the midst of our significant loss, we all tried to celebrate the good things from David’s life. At the end of the service, I invited people in the crowd to meet the same Jesus who had changed David several years before. We have an uncle we call uncle Blue. For years we had been praying that uncle Blue would meet Christ. The more we asked God to reveal himself to our uncle, the farther he seemed to move away from God. When uncle Blue accepted Christ at David’s funeral, we were all speechless. To this day, uncle Blue is a different person. His story is just one of many lives impacted by God for good — through David’s death.

Even though we grieved deeply and didn’t understand, God did something beautiful in our pain. God took our worst nightmare and somehow brought spiritual life out of a tragic death.

Are you questioning God in the middle of pain and suffering? Take your questions to Him. He will not be offended. Lean on Jesus and ask Him to bring good out of bad, life out of dead, hope out of despair. He is with you! Come share your thoughts with us on our blog. We would love to hear from you.