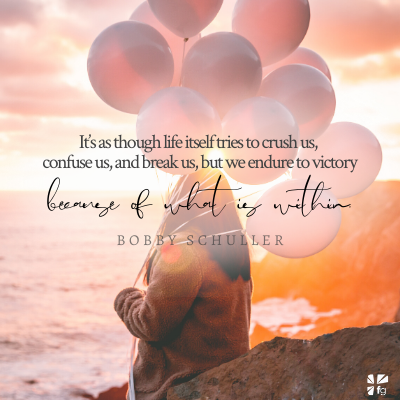 What lies behind us and what lies before us are tiny matters compared to what lies within us. — Unknown

God doesn’t want you to worry, because that robs you of life and energy. That doesn’t mean He will give you a stress-free life.

Stress can be good!

As a broad stroke, worry is bad for you. However, although it might feel strange to read this, stress, if handled the right way, is good for you. It makes you stronger, pushes you to new places, and keeps you from becoming complacent in your life. It’s very likely that when you think of times of adversity, they were also the times you grew the most. Stress is the pressure that makes us better — as long as we have the tools to understand its place in our life. It will be good for your soul and your body as long as you don’t hold it too long, and as long as you don’t internalize it.

No one has just one calling. God asks us to do lots of things in life, not just one big task. Much of life is an experience of peaks and valleys, highs and lows, in achievement. Through it all, the stresses we face prepare us for our next calling. Seminary was very stressful for me. I had to learn two ancient languages and spar intellectually with people who were smarter than me. I had to read tons of books and pulled many all-nighters. At no point did I think school was there only to stress me out. I believed through the whole process the stress was good for me — the training I needed for my next calling. I thought it was a privilege to be there, even though at times I hated it.

Though you may not feel it, it’s likely that many of the things you’re going through are actually a part of some preparation for the next big thing you’ll do for God.

Paul gives us a great metaphor for the kind of stress that brings out the best in us. He said:

We have this treasure in jars of clay to show that this all-surpassing power is from God and not from us. We are hard pressed on every side, but not crushed; perplexed, but not in despair; persecuted, but not abandoned; struck down, but not destroyed. We always carry around in our body the death of Jesus, so that the life of Jesus may also be revealed in our body. — 2 Corinthians 4:7–10

The metaphor of the clay jar as a representation of the human body was common in ancient Judaism. In the Genesis account God fashioned the bodies of Adam and Eve from the dust of the earth. In Paul’s time clay jars were everyday kinds of things, similar to plastic or glass in our day. Even today, if you go to an archaeological dig somewhere in Israel or Turkey, you’ll see broken bits of ancient pottery all over. It’s quite fascinating, actually. There are little two-thousand-year-old bits of clay from a people long gone, all of them in jagged shapes just laying around. Most places you can pick one up and put it in your pocket. No one cares because pottery in the ancient world was on par with something like Tupperware today. It was everywhere, and it was cheap.

Paul was saying we are a bit like that, like everyday clay jars that everyone thinks are normal and mundane. Little do they know there’s this amazing treasure hidden within our body — both the death and life of Jesus, which gives us a sort of resurrection power in our everyday living. It’s as though life itself tries to crush us, confuse us, and break us, but we endure to victory because of what is within.

This is a great passage in a discussion about stress because stress is pressure from our environment. This is what Paul experienced all the time. The name Paul means “short,” and it was likely he was a little guy, maybe also a bit socially awkward. It seems like he didn’t have loads of friends and yet still had to lead and make big decisions about the Church. His Jewish peers, many of whom didn’t think the Gospel was for Gentiles, constantly pressed him. He was dealing with a nascent church divided on theology, practice, culture, and a million other things.

It’s as though life itself tries to crush us, confuse us, and break us, but we endure to victory because of what is within.

He was also likely perplexed, as God had him going from this town to that with seemingly no rhyme or reason. He started traveling to India and God said, “No, not that way.” He was shipwrecked. He had people sabotaging his work. Once, in Lystra, a mob tried to stone him to death. They didn’t kill him, though, and after regaining consciousness, he just got up and started preaching again. He was a honey badger.

The takeaway is that Paul was telling his audience, many of whom were facing similar trials, “Don’t worry. You won’t break or be destroyed. The treasure within you, the life and death of Christ, will get you through this. It will make you stronger and show God’s glory to the world.” That message is the same for us today. Life will hit you, press you, confuse you, but won’t break you. Those experiences will train you and make you stronger.

Excerpted with permission from You Are Beloved by Bobby Schuller, copyright Robert V. Schuller.

Are you worried? Stressed? God may be preparing you for your next calling, your next season, your next ministry! How has past stress made you stronger? Come share with us on our blog. We want to hear your story! ~ Devotionals Daily