In the late 1400s in Nuremberg, Germany, two brothers, Albrecht and Albert, grew up wanting to be artists. They came from a very large family of more than a dozen siblings, and their father was a goldsmith. Although their family was relatively well-off by the standards of that day, their parents could not afford to send both of them to study art. So as the brothers grew older, Albert told his brother, “Albrecht, I want you to go and study to be an artist. You have an amazing talent, and I know you will draw and paint many beautiful works. I’m going to work in order to pay for your studies.”

“How? What will you do?” asked his younger brother.

“I’ll work in the mines if I have to,” Albert said. “Your talent is so great that I’ll do whatever it takes to see it come to fruition.”

So at the age of about fifteen, Albrecht left his family home to study as the apprentice of a great artist of their day, Michael Wolgemut. After his apprenticeship, he traveled to other places in Europe, including Italy, which was the center of the renaissance taking place in art. From the beginning, Albrecht’s talent was recognized by teachers and critics alike. All who saw his work couldn’t believe how good he was. His gift with pencil, ink, woodcuts, and paint emerged in every piece he created.

After several years, Albrecht returned home to Nuremberg. When he came home, his father threw him a feast for everything he had done and to show how proud they were of him. And where had his brother Albert been all this time? Down in the mines, grinding away so that Albrecht could fulfill his dream. Albert was serving a dream bigger than himself.

Midway through the feast, Albrecht got up to make a toast to his brother. With his voice trembling with emotion, Albrecht toasted his brother and thanked him for his sacrifice. He thanked him for going down in that mine for him so that Albrecht could go out and fulfill his dream. Albrecht concluded by saying, “For your great gift of service, Albert, I am now going to go down in the mine so you can go to art school and fulfill your dream.”

Albert got up, tears in his eyes, and thanked his brother for the gesture. Then he said, “Brother, look at my hands.” He held them up for all to see. His hands were worn, broken, calloused. There was no way he could go off to art school and do anything because his hands were in such terrible shape. He couldn’t even hold a pencil or paintbrush.

So Albrecht became determined to draw and paint enough for the both of them. He continued his career and left dozens of beautiful works, many of them that are on display in churches. However, he is probably best known for a sketch he did as part of a three-piece panel in a church. The sketch shows two hands clasped in prayer.

Albrecht wanted to honor his brother, and so he powerfully and poignantly captured the sacrifice Albert had made for him in the rough-hewn beauty of this drawing known simply as Praying Hands.

For somebody who’s hurting? To fulfill someone else’s dream?

Regardless of the position they play, they all buy in to the same level of sacrifice.

They have faith in one another and in the sacrifices of time, energy, strength, and emotional intensity they’re investing. They want to pay the price to be part of something bigger than themselves.

What is faith? Faith is believing in something you can’t see. Right now we can’t see a cure for cancer, not literally in front of us. But the vision is there, and countless teams of individuals — doctors and nurses, scientists and researchers — are living the vision. They see a day in the not-so-distant future when we will live in a cancer-free world. The CHUCKSTRONG campaign has raised almost two million dollars in the fight against cancer. We just have to keep living the vision and grinding away for the victory — one play at a time, one day at a time.

This is the battle we’re all called to fight. Life takes us out of the game, and suddenly we’re sidelined. For me, it was the fight against cancer; for our team, it was the fight to make it to the playoffs. But this same process of perseverance can help you face whatever impossible challenge you might be facing. No matter how great the odds seem that are stacked against you, it’s never too late to put hope in action. You just have to take life as it comes, doing the next thing and then the next. Never be afraid to ask for help and to accept the support you’re given. Give it everything you’ve got, and trust God for the outcome. Remember, your condition does not determine your position. You must understand your condition but focus on your positive position – to hope, to love, to serve. YOU WILL! YOU CAN! YOU MUST! YOU HAVE NO CHOICE. BY ANY MEANS NECESSARY. YOU WILL OVERCOME.

Excerpted with permission from Sidelined by Chuck Pagano, copyright Zondervan, 2014.

Have life challenges left you sidelined? Do you know someone who has sacrificed for your dreams? How have Chuck’s encouraging words helped you today? We’d love to hear from you on our blog! ~ Devotionals Daily 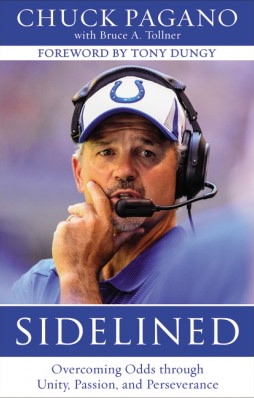