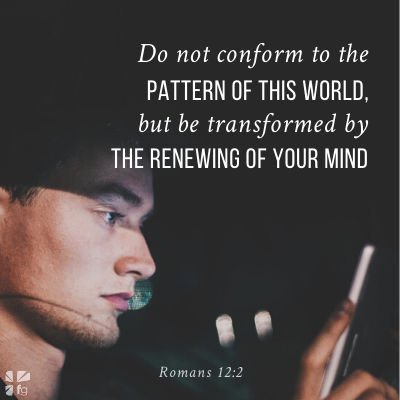 Like sand on a beach, the brain bears the footprints of the decisions we have made, the skills we have learned

Restart and reboot yourself. You’re free to go.

“Why do you say it’s not really true?” I asked.

“It’s like saying, ‘It’s not really my fault,’” he answered. “I can’t blame anyone or anything else for my problem. I’m supposed to trust God, right?”

“Well, that would be pretty cool,” he said, chuckling. “I wouldn’t feel like such an absolute loser.”

Any discussion about compulsive use of pornography is incomplete without understanding these physical changes. God created human beings in physical bodies, and David wrote of his own creation in the womb that he was “fearfully and wonderfully made” (Psalms 139:14). So are we. Defining ourselves and our problems in only spiritual terms not only is unbiblical but also hinders our recovery.

In the last decade, the field of neuroscience has exploded our understanding of the human brain. Recent discoveries have profound implications on treating various addictions and psychological disorders, and pursuing physical and emotional well-being. The consistent theme is that contrary to conventional wisdom, our brains are highly changeable.

When you fly on a major airline, your journey begins with a preflight announcement, which includes a review of the emergency procedure card in the back pocket in the seat in front of you. That card gives you important instructions about how to escape to safety in the event of emergency. You aren’t asked to master the finer details of airplane safety; you’re given basic instructions that could save your life if something goes wrong. My goal in this chapter is to give you the back-pocket version of how porn affects your brain, and how you can use this information to break free from porn’s grip on your brain.

How To Rewire Your Brain

What you think about is ultimately what you become. What we once called “the power of positive thinking” is increasingly backed by scientific evidence. The more attention your brain pays to a given input, the stronger and more elaborately it will be wired and retained in the brain.5 When we give our attention and focus to good things, like peace, joy, and self-control, our brains rewire themselves in a way that allows us to experience those good things. Wouldn’t it make sense, then, to be intentional about what we give ourselves to?

When Scripture exhorts us to set our minds on good things, it concerns more than just the well-being of our souls. It also affects the well-being of our brains. Our neural circuitry forms itself around whatever we give our attention and focus to. That’s why Paul connected our transformation with the renewing of our minds: “Do not conform to the pattern of this world, but be transformed by the renewing of your mind” (Romans 12:2).

In the next chapter I discuss how you can practice focusing on what is pure, lovely, and admirable, in a way that rewires your brain to its original setting before porn—but better.

Many men realize the importance of pursuing their passions. What is life-giving to your soul? What relationships have been affected by your use of porn? What enjoyable activities have stopped? Of all possible alternative passions, exercise is the most crucial. Studies show that exercise increases dopamine receptors, therefore helping to rewire the brain.6 Another study showed that the number one behavior associated with successful substance abuse recovery was exercise.7 If you have not been physically active in the past with some form of exercise, it’s important that you begin. Don’t assume you have to join a health club or sign up for the Ironman Triathlon. You can walk, hike, or ride a bike. Take the stairs instead of the elevator.

Recent attention has been given to children and adults who suffer from NDD, or nature deficit disorder, as a result of spending too much time online or engaged in electronic media. Avoid this disorder by interacting with the outdoors in the sunshine, fresh air, and natural beauty of God’s creation. Get out and move! Pursuing alternative passions expands your horizons and rewires your brain at the same time.

Employ the Power of Repetition

Studies show that repeated behaviors, over time, cause structural changes in the brain. These changes can be negative—causing compulsion and addiction. Or they can be positive—rewiring the brain so the stimuli of porn and lust are no longer a reflexive reaction. Repetition helps lock behaviors in the brain in the same way an athlete develops muscle memory. Or consider a concert pianist. When performing, he never thinks, Now I will reach my left hand exactly seven inches to the right while simultaneously moving my right hand two inches to the left. Instead, the pianist’s brain has learned to bypass the conscious cognitive step and follow a learned response.

Is pornography an issue for you or someone you know? How does it encourage you to know that the minds God gave us can be renewed and rewired? We’d love to hear your thoughts in the comments!