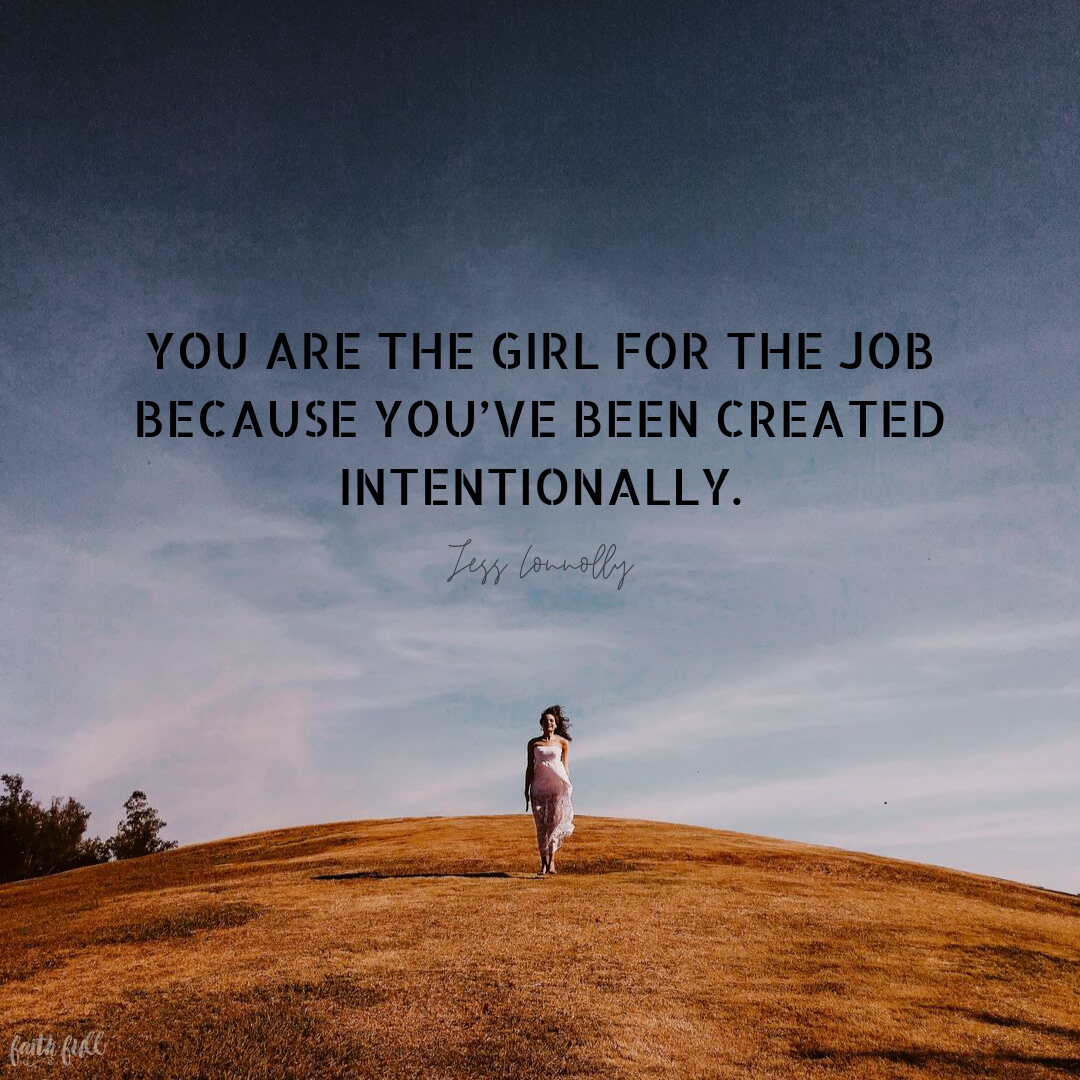 God Has the Last Word in Your Weakness

Your weakness is real. But I don’t believe in blaming or hiding, unless it’s in the Cross of Christ. As we take steps forward, believing He’s placed us here on purpose for the good of others and the glory of God — we cannot go boldly and hide at the same time.

We see this in the very beginning of God’s relationship with man and woman, as Adam and Eve are faced with the temptation to ignore God’s simple request for obedience:

When the Woman saw that the tree looked like good eating and realized what she would get out of it — she’d know everything! — she took and ate the fruit and then gave some to her husband, and he ate.

Immediately the two of them did “see what’s really going on” — saw themselves naked! They sewed fig leaves together as makeshift clothes for themselves. When they heard the sound of God strolling in the garden in the evening breeze, the Man and his Wife hid in the trees of the garden, hid from God.

God called to the Man: “Where are you?” He said, “I heard you in the garden and I was afraid because I was naked. And I hid.”

God said, “Who told you you were naked? Did you eat from that tree I told you not to eat from?” The Man said, “The Woman you gave me as a companion, she gave me fruit from the tree, and, yes, I ate it.”

God said to the Woman, “What is this that you’ve done?”

Both Adam and Eve hid from God when faced with their sin, and both chose to blame someone else rather than taking responsibility.

My friend, I don’t know where your weaknesses came from. I’m not sure if you’ve spent time tracing their roots, identifying when they first made their appearance. When it comes to yelling at my kids, I remember the first time I ever felt the rush of unholy power and truly screamed at them. I know the seed of sin that is anger was already in my heart, and I know I was already someone who had to watch how I used my words, because I was very liable to hurt someone. I’d been a yeller in my life, but I’d never, never yelled at my kids before the early summer of 2011.

It was sometime just after Father’s Day, and I know the timing so well because on Mother’s Day of that year, I found out I was pregnant, and on Father’s Day, I found out I was miscarrying. The next few weeks were extremely painful both physically and emotionally, as my body didn’t want to miscarry naturally, and I needed a lot of intervention and help from doctors. I was in so much pain, and suddenly, being alone with our kids was so much harder because I couldn’t chase after our sweet four-, three-, and two-year-olds. One day, when they were just being kids and I had to get their attention, I screamed. In anger. And it worked. And I kept yelling.

This moment has become a historical event in my life, because it pinpoints my choice to act on this sin of mine. And honestly, yelling at my kids is still one of my biggest active weaknesses. But I certainly can’t blame the miscarriage for my sin of yelling today, the same way it doesn’t help me to blame any other human for any other decision or agreement I make with my mind, body, or words.

It’s our natural inclination to shift the blame for our major weaknesses onto others. We can find fault with those who excelled and caused us to stumble in the shadow of their light. We can find fault with just about anyone who played a role in the development of the darker parts of our personality or character — the areas we wish we could leave behind.

But it’s our supernatural birthright, bought by the blood of Jesus and made possible by the power of the Holy Spirit, to quit blaming others for our weaknesses and instead allow the grace of God to transform them into something He can use for His glory and our good.

We have been given the supernatural ability to let God use our weaknesses so His power can be made perfect in our lives. The days of blame are done; the days of redemption are here.

And what about hiding? We’re not only breaking bonds of generational sin that started with Adam and Eve, we’re going to war with cultural expectations and standards that have built fortresses of fear around the idea of simply being ourselves and being honest with our own struggles. Even today, even in a culture that is beginning to say, “Come as you are,” it is wildly unacceptable to be weak. Especially in the church. Especially for believers.

On the flip side, I find that the incredibly brave souls who are comfortable sharing their weaknesses often have a “take it or leave it” mentality that screams, “Here is my ugly side. Embrace it! Love it! Don’t touch it! It’s mine!” And while the bravery to bring forth the truth is worth applauding and encouraging, this mind-set leaves no room for God’s power to find its true purpose in redemption. To own our weaknesses but not allow any growth to come from them is like receiving the best gift in the world and refusing to open it.

We don’t have to live as women who continue in cycles of hiding and blame anymore, and we don’t have to be women who are complicit in allowing other women to slip into these same shame-inducing patterns. We can be freedom fighters for the women around us when we go first, open up, share our own truth — weaknesses, warts, and redemption. We can literally change the world by being a safe place for others when we allow women to own the darkest parts of their lives and then encourage them to let the light transform them by the power of the Holy Spirit.

Have you ever wanted to change the world? I have three words for you: say you’re sorry.

If we don’t have to hide, we might as well ’fess up. Go ahead and publicly repent. This isn’t weakness; it is our witness. It is our worship. And when we own the things we genuinely could have done better and experience God’s grace, it frees up others to do the same.

So let’s stop hiding our weaknesses from God and other people, and, fueled by grace and compelled to change, drop the weapon of blame right where we currently stand. Don’t take that tool forward with you; it’s not the one you want. Have you ever wanted to drastically change the world? Let a friend show you her weaknesses and don’t back away. Don’t try to tidy her up, fix her, or convince her that what she showed you isn’t all that bad. Honor her honesty with care and the belief that God wants to use her weaknesses to grow her, mold her, and make her into the woman she was created to be.

Why are we still talking about weaknesses and all the potentially negative sides of this call that’s been placed on your life? Because to be completely honest, it’s the hiding and the blame that will keep you from stepping into God’s abundance more than anything else. The Word of God proves to us over and over again that weaknesses will not keep us from obediently fulfilling whatever the Father has for us. But if we do not bring our whole selves to the table, we will not receive the fullness of His power. And if our hearts are embittered by blame, we won’t be freed up to love the people we’ve been asked to.

I have a theory about what we talk about when we talk about our weaknesses. Here it is: When we don’t own up and apologize for our real weaknesses, we end up apologizing for qualities that aren’t weaknesses at all.

Let me show you what I mean:

These are simply personality traits. They’re not inherently negative or positive. Yet across the world, these descriptors are being used both to praise women and demean them. Why is it good in some contexts to be known as outspoken and independent, and bad in other contexts? Why can’t we agree on these traits?

It would be foolish for me to attempt to dive in and prescribe personality characteristics for anyone, so instead I’ll just caution you to hold your “weaknesses” up to the Word of God and see what He says about them. Ask whether or not these are attributes found in the character of Christ, in whose image we’ve been made.

Before you spend one more moment bemoaning your perceived shortcomings, it would be wildly helpful to identify if they actually make you weak or if they make you more like Christ.

You are the girl for the job because you’ve been created intentionally and held together miraculously and mercifully by a God who loves you, sees you, and hopes the best in you.

Your weaknesses are not a liability to the kingdom of God, and there is no skeleton in the closet or hidden trait in your being that would shock Him or cause Him to stop coming toward you in grace. All of you is loved, all of you is held, everything is redeemable, and the rest of your life is dependent on His capacity, not your ability to cover up who you are or how you’ve been made.

You are the girl for the job.

Not in spite of your weaknesses, but because His power is made perfect in them.

Excerpted with permission from You Are the Girl for the Job by Jess Connolly, copyright Jessica Ashleigh Connolly.

You are the girl for the job. Even though you have weaknesses. Especially because you have weaknesses! No hiding. No blame. But, apologies go miles and miles to show our authenticity and humility. Come share with us how God’s power is made perfect in your weaknesses on our blog. We want to hear from you! ~ Laurie McClure, Faith.Full

Join Us for the Online Bible Study