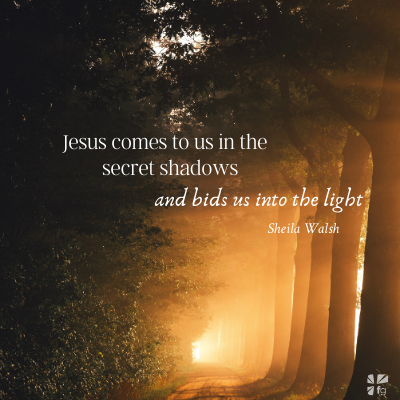 A year before Mum’s death, I was sitting in a departure lounge waiting for my flight to board when that dreaded announcement graced our ears: “The 3:30 p.m. flight to Dallas, Texas, will now depart at 5:40 p.m. Thank you for your patience.”

I looked at my fellow passengers and questioned the announcer’s gratitude for the passengers’ “patience.” It was our flight’s third delay, and tempers were flaring. I picked up my briefcase once again and returned to the coffee shop where I had spent much of the last two hours. I ordered a cup of tea and was settling in to read my newspaper when I became aware of someone standing in front of me. I looked up. A woman about my age, tall and slim with short blonde hair, smiled and asked, “Would you mind if I joined you for a moment?”

“I heard you speak at a conference,” she said. “We have similar stories.”

“When was that?” I asked. “It was last year, in California,” she said. “It led to this.” She pulled up the sleeve of her sweater to reveal a tattoo on her wrist. It was a semicolon. “May I ask what that means?” I said. She looked down at it and rubbed her fingers over the black ink. “It’s about choosing to live one more day,” she said. “I’m part of a movement.” “What’s the movement?” I asked.

I remembered that conference well. Kay Warren had invited me to be a keynote speaker at the annual Church and Mental Health Symposium, a conference rising from the ashes of Kay and Rick’s son Matthew Warren’s suicide. I remember being unusually nervous as I flew out to speak that first night. I wasn’t quite sure what I could add. The lineup of speakers was impressive and intimidating — United States Surgeon General Vice Admiral Vivek Murthy; Paul Summergrad, former head of the American Psychiatric Association; former congressman Patrick Kennedy; and many, many more.

I was the speaker on the opening night, which I was grateful for because it meant I didn’t have to follow any of the other specialized presenters. I remember my opening line so well. It’s something I couldn’t have said for most of my life.

“Good evening. My name is Sheila Walsh, and I am profoundly grateful for the gift of mental illness. It means that I can look into the eyes of someone else who is suffering and say: me too.”

Watch this Conversation Between Kay Warren and Sheila Walsh

Such little words. But how I would have welcomed hearing them from someone in the weeks before I was hospitalized! In those days the church rarely addressed any area of mental illness.

I looked at the woman across from me in the airport coffee shop. “So, what does the semicolon mean?” I asked.

She looked down at her wrist again and said, “A semicolon is used when an author could’ve ended a sentence but chose not to. I am the author, and the sentence is my life.”1

She told me that when she raises her hands in worship, that little tattoo becomes an offering to God, a daily acknowledgment of her brokenness and her faith.

“I need to go now. My flight’s boarding,” she said, picking up her backpack.

I thanked her for sharing her story. And I meant it. I needed to hear her words.

After she left I thought about the little tattoo on her wrist. What was it about that symbol that helped her so much? Perhaps it reminds her to fight through the darkest nights of depression. It gives her something to focus on. It tells her to hold on. It’s a tangible declaration to her weary soul that her story is not over yet even when her mind tells her it should be.

Further, perhaps it lets her know she is not alone. It reminds her of the community around her who says “me too.” Shame thrives in hiding and solitude. It whispers,

Freedom begins in a community of “me too” people, people committed to helping you carry your burden. Being part of Project Semicolon has given her that kind of community. They don’t understand because they are experts. They understand because they’re honest about their own suffering, and they help her combat the lies. They help her see the truth about herself, and they accept her just as she is. That kind of community deprives shame of the oxygen that keeps it alive.

Speaking the truth about her life to those who understand her path has given her strength to keep walking.

After she left, I sat and considered Christ’s encounter with Zacchaeus, a man despised by everyone who knew him. He was Jewish, yes, but he was also a tax collector for the Roman occupiers.

The Romans gave this unsavory job to local recruits and allowed them to keep a percentage of whatever they collected. Zacchaeus and his colleagues took more than what was owed. They were parasites living off the vulnerability of their own people. When Christ decided to share a meal with Zacchaeus, the people were horrified. How could Jesus spend time with a man who was bleeding them dry?

This was His response:

I considered the verse and thought about the study I’d done on it years ago. The word used here for lost means “destroyed, ruined, broken beyond repair.”

I thought about the woman, about her semicolon tattoo. I thought about Jesus, who didn’t come for those who are doing-just-fine-thank-you. He came to save those who were and are willing to acknowledge they are broken beyond repair. And even now, in His tender way, He comes to the doors of our hidden places and invites Himself in for supper.

Jesus comes to us in the secret shadows and bids us into the light. He wants to be in communion with us, wants to help carry the load of the pain and shame we secret away in isolation.

I don’t think I’m the only one who has constructed walls around parts of myself. We all know that pain is part of life, but when too much of it happens all at once — when it happens too early in life or when we feel helpless to combat it — the pain can make us believe we don’t want to go on. It’s why we build a secret place inside ourselves where it can hang out. The pain might follow us there, but we believe it can’t hurt us as much if it’s walled up. And we falsely think that the world can’t see it either.

We can pretend that everything is okay. And perhaps that’s a sort of saving grace for some of us as children. When I think of the stories women have shared with me through the years — stories of the worst kind of abuse and betrayal — I’ve wondered how they’ve made it. Perhaps some have survived by burying the pain deep inside, but I believe now that others have discovered the beauty of living open, yet broken, with Christ.

My new friend with the tattoo doesn’t pretend that her pain is gone but brings it into the light of a crucified Savior. He helps her carry it with hands scarred by love. His resounding “Yes!” to the Father’s plan to save us took Him down a brutal bloody path, but it gave life to each one of us who will say yes to Christ and no to the lies that would keep us hidden.

I know your story is different from mine, but pain is pain and you are not alone.

In Luke 19, Christ makes His way into Jerusalem on the back of a donkey. The crowds welcome Him with open arms, shouting,

Blessed is the king who comes in the name of the Lord! Peace in heaven and glory in the highest! — Luke 19:38 NIV

Then Luke tells us that as Christ looked over the Holy City, He wept “because you did not recognize it when God visited you” (Luke 19:44).

Luke moves away from that panoramic picture and focuses on the weeping face of Christ. Why do you think Christ wept in that moment?

I wonder if Christ ever weeps over us when — even as we raise our voices in worship — our hearts, our shame, our pain is hidden? Is there something you have hidden away inside that you need to bring into the light of Christ?

My friend Ann Voskamp inks a little cross on her wrist each morning as a reminder of the One who was wounded for her so she doesn’t have to wound herself. What would help you to remember the relentless love of Christ during the messy moments of life?

God is our refuge and strength, a very present help in trouble. — Psalm 46:1 ESV

Hear from Sheila about In the Middle of the Mess

When you’re not doing-just-fine-thank-you, when your walls are high and your heart is hidden, remember there’s a flock of others, as well as our own King Jesus, who can say “me too.” The Me Too movement that has swept across the globe holds power because it’s a linking of arms with others who understand pain. We are better when we tear down walls, tell our story, and put a semicolon at the end of it. Not a period. Come and share your thoughts with us on our blog. We want to hear from you!~ Devotionals Daily