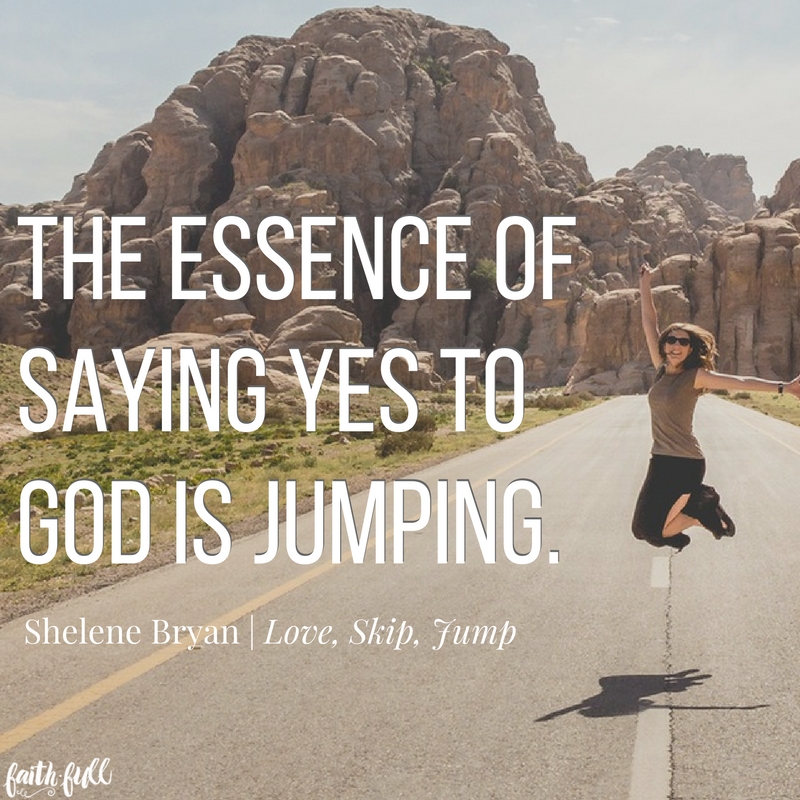 After He had dismissed them, He went up on a mountainside by himself to pray. Later that night, He was there alone, and the boat was already a considerable distance from land, buffeted by the waves because the wind was against it. Shortly before dawn Jesus went out to them, walking on the lake.

When the disciples saw Him walking on the lake, they were terrified. “It’s a ghost,” they said, and cried out in fear. But Jesus immediately said to them: “Take courage! It is I. Don’t be afraid.”

“Come,” He said. Then Peter got down out of the boat, walked on the water and came toward Jesus. But when he saw the wind, he was afraid and, beginning to sink, cried out, “Lord, save me!” Immediately Jesus reached out his hand and caught him. “You of little faith,” He said, “why did you doubt?” And when they climbed into the boat, the wind died down. Then those who were in the boat worshiped him, saying, “Truly you are the Son of God.” — Matthew 14:23-33

That is what I love about this passage, the fact that Peter actually jumped out of the boat. And by jumping, he had the amazing opportunity to walk on water!

There were eleven other disciples who, in the black of night in the midst of a terrifying storm, just like Peter, saw Jesus walking on the water toward them. They, like Peter, all heard Jesus’ reassurance: “Take courage! It is I. Don’t be afraid.”

Eleven didn’t jump, but Peter took that leap right out of the comfort and safety of the boat to go be with his Lord. It’s not that the other disciples weren’t followers of Jesus. Indeed, they were passionate followers, and most would soon lose their lives as a consequence of their true devotion. But Peter was willing to do something that no one else was — jump.

You will hear a lot more in this book about what I believe is the biggest life-obstructing condition of our current generation: comfort and safety. For those of us who have lived our lives way too long in a self-centered “me world,” this Bible passage is very instructive. Just like the eleven disciples who did not jump, we each have our own personal “boats” of comfort and safety that keep us from jumping into the exciting waters God has prepared for us. The question is, what is holding you back from being like Peter and making the jump?

John Ortberg has written in his superb book If You Want to Walk on Water, You’ve Got to Get Out of the Boat:

What is holding you back from really jumping in with your Creator?

The desire to have others perceive you as successful?

That college you really want to attend?

For me it was success in business and the admiration of others that came with it. I craved the accolades that accompanied being a successful businesswoman. For many years I fought God on the direction He wanted to take my life because I liked the praise that tickled my ears, and I loved the comfort of luxury.

Recently I had a meeting with a college admittance counselor at my son’s high school. This is an amazingly sharp young woman who had received a master’s degree from Harvard University. She explained how after graduating from Harvard she got her dream job and went to work in New York City on Wall Street. After a few years she transferred within her company to the West Coast and had an office with a gorgeous view of the Pacific Ocean.

“My job was to make a lot of rich people a lot richer,” she said. In the eyes of most people, she had really arrived. But over time she realized that making rich people richer was not really what God had in mind for her to do with her gifts.

So, she jumped. She took a huge pay cut and went to work helping high school students find the right path for college and pointing them in the direction of a career. Sure, she could use her God-given gifts to make money for people — or she could use those gifts to pour into young people and make a difference in the lives of our future leaders.

After she told us her story, she proceeded to tell us that after that year she was going to be handing us off to a new college admittance counselor.

“Well, actually, I am moving to South Korea. I accepted a position there with a school to help Korean students find their way.”

This is a girl who is willing to jump.

So what is jumping? Jumping looks different for every person and in every circumstance, so how can you define what it means to jump?

I’m not sure you can fully define what it means to jump, but this is the best I can do: Jumping is an act of your will to use your God-given gifts to affect others. It is an action, a choice followed by movement, a decision resulting in moving feet. Jumping involves moving from a state of inertia. The dictionary defines inertia as resistance to change. Newton’s first law of uniform motion states an object continues to do whatever it happens to be doing unless a force is exerted upon it. If you are not using your God-given gifts to help others, you’ve got to expend some energy to get moving. You have got to jump.

When it comes to living the adventure of yes in your relationship with God, the essence of saying yes to God is jumping.

The Cost of Jumping

There is a cost to jumping. For Peter, if he could not walk with Jesus on the water, his jump was probably a death sentence. People of Jesus’ day did not commonly know how to swim. They would stay out of the water to avoid the threat of drowning.

Fishing was a dangerous profession because falling overboard and drowning while pulling in nets filled with fish was common, and it took thousands of lives.

When Peter jumped out of the boat, it was totally unfamiliar territory and the stakes could not have been higher. There was no backup plan to do the breaststroke if the walking thing didn’t work out. His was a life-or-death leap of faith. If Jesus was not who Peter believed Him to be, the Son of the living God, Peter would not be returning to the boat.

There is a cost to jumping, but the risks never outweigh the reward, and the cost of not jumping ultimately will be even greater. Some will count the cost of jumping to be too high, but I can assure you that Peter never regretted that experience of walking on water with Jesus.

What’s holding you back from jumping into whatever the Lord is calling you into the deep water to do? For me, the battle is often fear — that I’ll be in too deep and sink, that jumping will turn out to be a foolish choice, or that I might look foolish, or that I’ll simply fail and disappoint others and even God Himself. When you say your reasons out loud, they lose (at least some of) their power, don’t they? And, in light of what lies ahead, what God has planned, isn’t jumping worth it? Come join the conversation on our blog. We want to hear from you about trusting Jesus and jumping! ~ Laurie McClure, Faith.Full